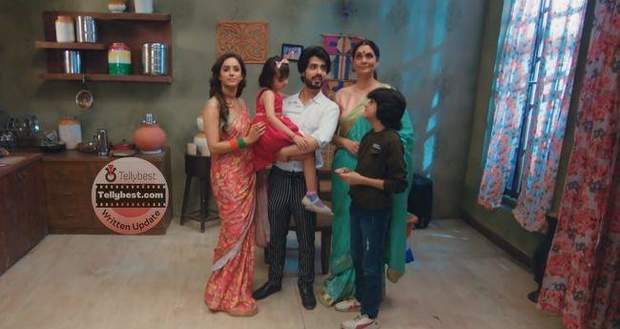 Mr. Malhotra assures Rudra that if he has a job available, he will call him.

Further, Malhotra calls Armaan and tells him that he has stalled Rudra.

Malhotra tells Armaan that he would never cross him and in return, Armaan gives him an incentive.

Rudra goes from one office to other and leaves empty-handed.

Meanwhile, Sharda tells Preesha that she has some work so she is leaving.

Preesha asks Ruhi and Saaransh where Sharda is but they are clueless too.

Rudra finds a small bar to work in where he gets paid daily and after negotiations, he gets the job with daily paid wages.

Meanwhile, Sharda meets Pihu and goes into her old house to pick up some stuff.

On the other hand, Rudra sings but gets no appreciation which disheartens him but after getting paid he feels content that he will be able to feed his family today.

At home, Preesha sees that Rudra is disappointed and asks what his job is.

But there is a knock at his door by the police along with Armaan.

The police are there to arrest Sharda on the complaint filed by Armaan.

Rudra gets aggravated and tells that his mother would never do such a thing and tells the inspector that it is all Armaan’s plan.

He pushes Armaan but the police intervene and tell him to stop immediately, Preesha holds Rudra and tells the inspector that Armaan is a fraud.

Hearing all this, Armaan shows them that the proof in the form of a recording showing Sharda taking some invaluable statues of god from his house.

Sharda tells Armaan that he is a very impolite man and she took her own god from her own house.

She further says that he may look at the statues as a valuable possession but to her, those statues are a mere way of connecting to god which she would never keep at a devil’s house.

Armaan contradicts and says that she is the one who stole them.

He asks the police to search their house for any other stolen stuff.

The police do so and tell them that there is nothing valuable except for the statues.

Preesha tells the officer that they are innocent.

Armaan tells them that now that they have found the statues they should arrest Sharda and go.

At that very moment, Pihu comes in and tells them that she gifted those statues to Sharda and shows CCTV footage to prove her statements.

The police insults Armaan and leave.

Pihu apologizes to Sharda for Armaan and leaves too.

On the other hand, Armaan is frustrated and takes it out on a servant and Pihu enters and questions Armaan for his drama.

However, Armaan tells her that he wants Rudra to beg for his life in front of him.