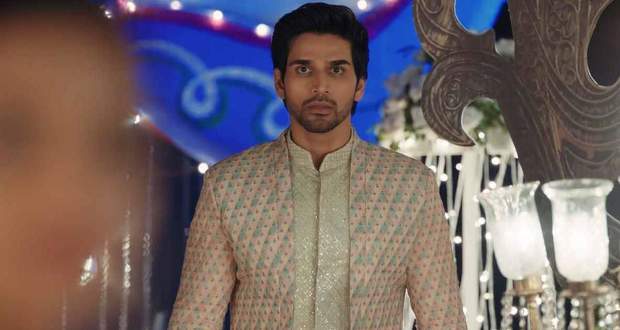 He tries to click their photo together to confirm Rudra’s suspicion later.

Meanwhile, Roohi and Saaransh run away from the security together and pause at the exit.

However, with a sad face, Roohi tells Saaransh that Preesha has forgotten them and grown to love another "didi" (referring to Pihu).

Saaransh then explains to Roohi patiently that there must be a reason for Preesha to not recognize them, otherwise, Preesha loves her kids more than anyone else in the world.

Unfortunately, Vanshika catches Saaransh and Roohi at the party and asks them the reason they are here.

However, Saaransh lies saying it is his friend’s birthday party.

On the other hand, the organizer of the party, Mr Oberoi’s daughter requests Rudra to sing.

Rudra declines at first but upon Vanshika’s encouragement, he decides to sing a lovely song.

Meanwhile, Armaan catches Anil taking Preesha’s photo and attacks him with a rod.

At the same time, Rudra starts singing and Armaan immediately recognizes the voice.

On the other hand, Pihu sees Raj listen to his song secretly in a corner.

She feels confused about how Raj and Vidyut, being brothers, can be so different from each other.

However, when she comes face-to-face with Rudra, Preesha’s mind plays a moment in which Rudra can be seen slapping Preesha.

She faints on the spot with Armaan hiding her face with a dupatta so Rudra doesn’t see her.

As Armaan does not stop for Pihu, Pihu’s dupatta gets flown over Rudra’s face.

He feels confused because he sensed Preesha’s presence but every time it turns out to be Pihu.

Questioning what connection Rudra and Pihu might have, Rudra asks for signs from the Universe to find Preesha.

© Copyright tellybest.com, 2022, 2023. All Rights Reserved. Unauthorized use and/or duplication of any material from tellybest.com without written permission is strictly prohibited.
Cached Saved on: Wednesday 23rd of November 2022 08:27:23 PMCached Disp on: Saturday 3rd of December 2022 03:18:05 PM