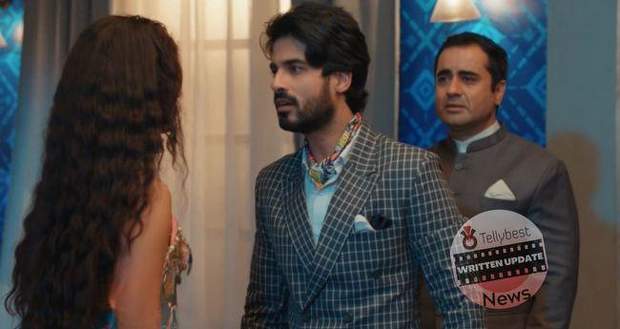 Today's Yeh Hai Chahatein 1st November 2022 episode starts with Preesha pacing back and forth in her bedroom, thinking about why Rudra did not come to her when he was alive.

She thinks if he had come earlier, she wouldn’t have to marry Armaan.

Just then, Pihu comes and asks Preesha if they can have a talk.

Preesha lowers her gaze when Pihu starts talking about how she and Rudra fell in love.

Pihu tells Preesha that after Vidyut’s death, Rudra became her strength and they unknowingly fell in love.

However, she then diverts the attention to Armaan and asks Preesha why she married Rudra’s biggest enemy on Earth.

Preesha says it is a long story and Armaan enters her room with a lollipop in his hand.

She asks Preesha what has happened to him but Armaan distracts Preesha and asks her to sing a lullaby.

Preesha tries to dodge him but he throws tantrums like a kid and ultimately puts his head over Preesha’s lap as she narrates a bedtime story.

As soon as Pihu starts to leave, Rudra enters the room and pushes Armaan off Preesha’s lap angrily.

He shouts at Preesha crazily and asks her what the hell she is doing with him over her lap.

Digvijay, Sharda, and the kids come after hearing the screaming while a scared Armaan hides behind Preesha, asking her why this uncle (referring to Rudra) is scolding him so much.

Sharda takes Rudra & Pihu to a different room and explains that after he got into an accident, he has been acting like a kid.

However, it is difficult for Rudra to understand why Preesha married him and is caring for him.

An angry Rudra again goes to Preesha’s room and pushes Arman off after seeing how tightly he holds Preesha’s hands.

Digvijay tells Rudra that Arman is sick while Preesha shouts at him to calm down.

A scared Armaan pees in his pants and Preesha struggles inside to tell Rudra about their baby in front of everyone.

Later, Saaransh asks Rudra to come with him to the terrace and tells him that he stands with Preesha.

He asks Rudra to open his eyes and realize that Preesha never does anything without a reason.

Saaransh maturely explains to Rudra that after he was gone, they went bankrupt but with Armaan’s money, they were able to retain this house.

After Saaransh goes, Preesha comes and tells Rudra she missed him so much.

She tells him about coming to the terrace after his death and staring at the stars, hoping Rudra will come back one day.

With teary-eyes, Preesha tells Rudra he took a lot of time to return while Rudra says love doesn't have a time limit.

However, an angry Ruhi interrupts their conversation and asks Rudra to put her back to sleep and not talk to Mrs. Armaan Thakur (Preesha).

Preesha's face falls while Pihu grins, watching the scene from afar as she is the one who woke up Ruhi to prevent Rudra & Preesha from talking.

© Copyright tellybest.com, 2022, 2023. All Rights Reserved. Unauthorized use and/or duplication of any material from tellybest.com without written permission is strictly prohibited.
Cached Saved on: Monday 21st of November 2022 02:34:54 AMCached Disp on: Monday 5th of December 2022 12:54:45 AM