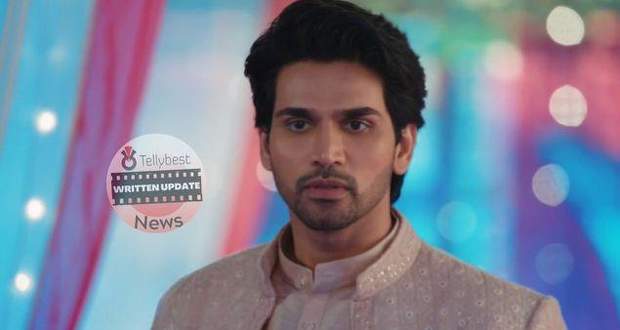 Today's Yeh Hai Chahatein 1st October 2022 episode starts with Armaan making coffee and adding sleeping pills to it so that Preesha does not wake up and fails to attend the wedding.

Armaan gives the mug of coffee to Preesha and leaves after seeing her take a sip.

Later, Pihu comes to Preesha's room and gets shocked to see her asleep.

Preesha wakes up and Pihu compliments her outfit after which they both go to Armaan's room.

However, they go to his room and find him asleep as Pihu recalls overhearing Armaan's plan and bumping into him intentionally.

Further, Pihu exchanges the mug of coffee and then gives the spiked coffee to Armaan to turn the tables.

Back in the present, Preesha says that they should not go as Armaan is not going but Pihu convinces her to go to the wedding.

Meanwhile, at the Khurana house, Rudraksh gets nervous wondering what will happen if Preesha doesn't remember everything while Sharda, Roohi, and Saaransh comfort him.

Just then, Pihu and Preesha also arrive there and greet them.

Sharda takes Pihu with her while Rudraksh asks Preesha if she believes now that he's not in love with her and has moved on.

Preesha tells him that he should do what he wants to which Rudraksh says that if it was possible he would confess to the person he loves and wants her to start again with him forever.

Later, the wedding starts and Sharda brings Vanshika downstairs who is wearing a saree and a red dupatta on top.

Preesha gets a little flashback and asks Pihu about Vanshika's outfit while Pihu says that it might be their wedding theme.

On the other hand, Armaan's uncle wakes up Armaan and tells him to go to the wedding as soon as possible before Rudraksh can play one of his tricks.

Before the wedding can be completed, Raj comes there and stops the wedding while portraying Yuvraj from behind.

Preesha starts recalling all her memories with Rudraksh, Roohi, and Saaransh and gets emotional as she realizes that she was happy with her family as he said.

© Copyright tellybest.com, 2022, 2023. All Rights Reserved. Unauthorized use and/or duplication of any material from tellybest.com without written permission is strictly prohibited.
Cached Saved on: Tuesday 22nd of November 2022 11:10:36 AMCached Disp on: Sunday 4th of December 2022 11:38:26 PM