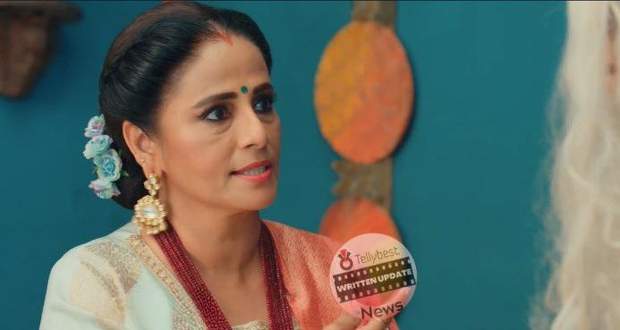 Today's Yeh Hai Chahatein 1st September 2022 episode starts with Arman walking confusedly into his car, thinking how could Prem Maali make a dead plant healthy again because only God can breathe life into the old.

As Arman’s driver passes by the street, Arman notices an overflowing dumpster with the same package Kanchan’s Orchids arrived.

Getting suspicious, Arman opens it and gets shocked to see Kanchan’s name on it.

He realizes that Prem must have ordered new Orchids but how can he get them since they are so expensive?

In frustration, Raj throws his phone on the ground but Pihu’s call stays on the speaker.

Pihu promises to find the real perpetrator who stole Raj’s voice but Vidyut enters the conversation and tells Pihu what else she want now.

He cuts her call and asks Raj to have some mercy since the Thakur family has become like a curse to the Khuranas.

Meanwhile, Arman goes to a nearby florist who imports plants from other countries and enquires about the Orchid plant he found in the dumpster.

Arman asks the shopkeeper to show him the names of the people who have ordered this plant from Mauritius recently.

Arman realizes that it was Rudra who ordered this so his spy, Prem, could still live in the Thakur House and keep an eye on Preesha.

At home, Preesha asks Arman why he has called Prem while Arman says he wants to congratulate Prem since he made the dead plant alive due to ‘experience!’.

Arman first mocks Prem saying his experience is unbeatable but then places the dead Orchid plant on the table asking how come he found this in the dumpster.

Arman also shows Preesha the invoice he collected from the florist, saying it is Rudrakash who ordered this so Prem Ji could stay here.

However, an unknown woman comes and says how can anyone believe Arman.

It is Vanshika who is dressed as an old woman and says it is her who stole this plant for Prem Ji’s sake.

Rudra looks at her in confusion until she comes beside him and poses as Prem’s Vohti (wife).

She laughs nervously saying she works in the Khurana House and when she saw Prem Ji disappointed, she couldn’t help but steal the Orchid from the Khurana garden and give it to Prem.

Digvijay says it is all Prem’s fault since he made the plant die however, Prem AKA Rudra mutters dejectedly, he planted it but the orchid died.

© Copyright tellybest.com, 2020, 2021. All Rights Reserved. Unauthorized use and/or duplication of any material from tellybest.com without written permission is strictly prohibited.
Cached Saved on: Saturday 1st of October 2022 09:04:20 PMCached Disp on: Wednesday 5th of October 2022 05:37:53 PM