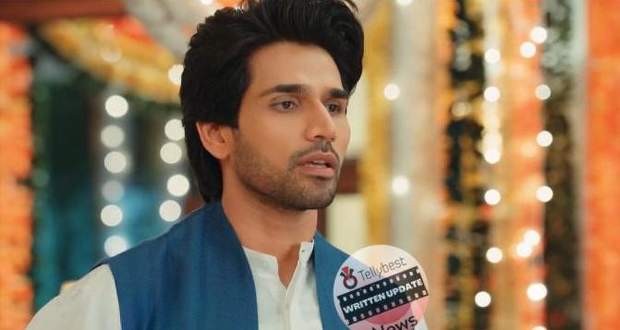 Today's Yeh Hai Chahatein 20th August 2022 episode starts with Arman stealing the idol of Lord Krishna and hiding it in the cupboard.

He feels proud and says now he will be able to threaten Prem Maali by proving him as a thief in front of Preesha and she will have to listen to him because he has the evidence.

Meanwhile, at college, Raj asks Pihu if she is ready for the practice or not.

Pihu tells Raj that if he is not okay with dancing, he doesn’t have to dance.

However, Raj is already in a good mood and swirls her around, singing the song ‘Ishq Waala Love’.

Pihu gets impressed while Raj informs her that Vidyut taught him how to dance.

Pihu doesn’t believe that Vidyut has changed but Raj assures her, saying Rudra sir counseled him and Vidyut feels what he did with Pihu was utterly wrong.

The Janmashtami celebrations begin at the Thakur House and Digvijay sits with Arman on the sofa, overlooking the preparations.

However, he asks Arman why he is not angry seeing Prem enter the Puja Room.

Arman is cool and calm and tells Digvijay to wait and watch the drama that is about to happen.

Meanwhile, Raj informs Pihu that he is waiting outside her house.

Pihu brings a bowl full of Kheer (sweet) for Raj but he tastes it.

Pihu gets shy when her hand brushes across Raj.

Inside the house, Kanchan says that Ladoo Gopal is not in the Mandir and how come it can vanish when there is no point in a thief entering the house.

Arman says there are outsiders in this house and points toward Prem.

Rudra gets flabbergasted and says how can he steal something at such an old age.

Even Raj hears Kanchan threatening Rudra by saying she cannot believe Prem would do all this when she treated him just like a family.

Digvijay says enough is enough and he will hand Prem to the police while Roohi and Saaransh stand nervously.

Rudra feels it is game over for him while Raj watches this scene happen through a window and says he needs to do something.

© Copyright tellybest.com, 2020, 2021. All Rights Reserved. Unauthorized use and/or duplication of any material from tellybest.com without written permission is strictly prohibited.
Cached Saved on: Saturday 1st of October 2022 10:51:40 PMCached Disp on: Wednesday 5th of October 2022 06:13:55 PM