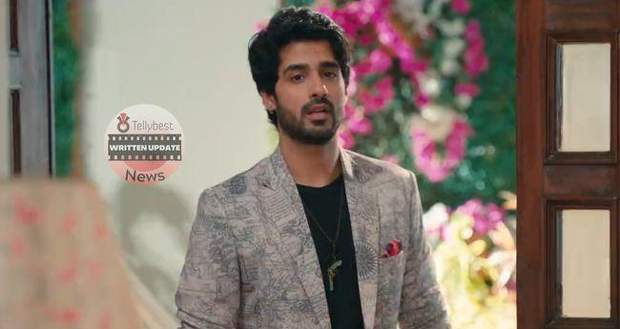 She tells Armaan that she wants to see Rudra get married, so she can leave India totally with a free mind.

Arman gives a long stare to Preesha before repeating her words, saying she can stay only till Rudra’s marriage.

Meanwhile, Rudra worries until he gets Pihu’s call and she confirms Preesha’s stay in India until his fake marriage is done.

The next day, Pihu brings Preesha to Rudra’s recording office where she and Raj are going to practice their song.

Preesha gets jealous when she sees Rudra get closer to Vanshika and he softly kisses Vanshika’s ears.

Preesha immediately gets a flashback where Rudra kissed her ear too.

Grabbing Pihu’s hand tightly, Preesha feels jealous and goes to sit on the sofa to wait for Arman.

The recording begins after Kalindi arrives and she starts to touch Raj inappropriately.

Pihu notices it and taunts Kalindi that she is going to sing too.

Kalindi gives her a fake smile while Raj begins the song, followed by Pihu.

The lyrics of the song resonate with Preesha and she keeps staring at Rudra rudely.

Later, before the press conference begins, Pihu sees Kalindi happily chatting with Vidyut and feels there is something wrong with her.

At the press conference, Rudra announces he is going to get married to Vanshika while the media congratulates him, making Preesha jealous even more.

Arman feels like this is a dream where Rudra has publicly announced his marriage.

Suddenly, Kalindi walks in with a torn blouse and messed lipstick, claiming that she has been molested by Raj.

Preesha and Arman scold them while Pihu tells Rudra that Raj cannot ever do this.

Kalindi makes them follow her inside the green room where Raj is.

The camera flashes at his confused face while Raj tells Rudra someone locked him forcefully while he went to use the washroom.

Pihu looks at Kalindi angrily and announces there is something fishy while Kalindi plays the victim card.

However, Preesha falls for it and asks Arman to call the police on Raj.