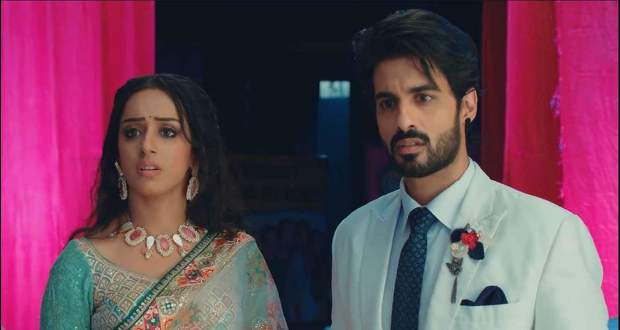 Preesha leaves and goes to the back of the school building shouting for Rudraksh.

However, Rudraksh stops Preesha from shouting and takes her toward Dev's body.

Preesha is stumped to see Dev and goes to check if he is alive and feels the soul leave her body realizing that Dev is dead.

Meanwhile, Alia tells Revati that Tarun knows everything and brings him to Revati to reveal everything that Dev has done which makes Revati feel out of breath.

Alia gives Revati her medicine after which Revati thinks of teaching Dev a lesson and decides to go to the hospital.

At the same time, Preesha becomes hysterical seeing that Dev is dead, and keeps asking Rudraksh if he did and that she won't let anything happen to him when Rudraksh shakes her and tells her the whole truth.

Preesha says that they have to report it to the police but Rudraksh adamantly refuses to say that the police will arrest Saaransh and that he can't let it happen.

At the Khurana house, Sharda sees Saaransh crying as he remembers Dev's death in the corner of his room when Sharda comes there and calms him.

However, Saaransh lies to Sharda that it's only a stomach ache while Sharda decides to call Rudraksh.

Back at the school, Rudraksh brings a gunny bag and asks Preesha if she is with him and Preesha agrees after which they put Dev's body in the bag and take it to the parking lot.

However, Rudraksh realizes that he gave the car to Sharda and tells Preesha to check all the cars in the parking lot for an open truck.

Preesha manages to find a white car with an open trunk and put the body inside the trunk.

Just then, Revati comes there and asks them what they are doing there.

At the same time, Sharda calls Rudraksh and he acts as telling her that they'll come in a taxi.

Preesha tells Revati that they forgot that they gave the car to Sharda and are waiting for a taxi.

However, Revati offers them a ride and unlocks her car while Preesha and Rudraksh get shocked realizing that they put Dev's body in Revati's car.