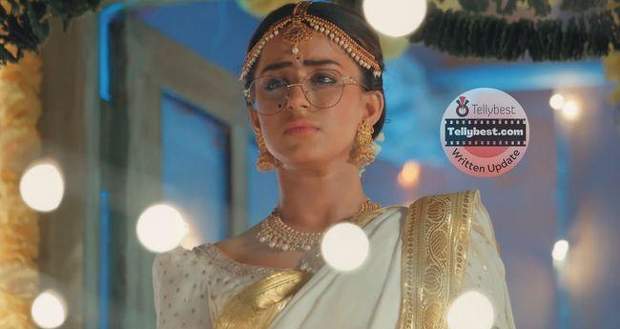 Today's Yeh Hai Chahatein 21st December 2022 episode starts with Samrat hyping his fans up as he says the next song he will dedicate is to his future lover whom he wishes for from a falling star, Nayantara.

Samrat starts to play his guitar and he sings the "Dil Ruk Ja Zara" acoustic version that earns praise once more from his hyper fans.

On the other hand, Ishani is up early in the morning and dancing on her bed, seeing the live stream of Samrat's concert from London.

The next song Samrat sings is a bit energetic as his fans lip-sing every bit of the lyrics along with him.

His long hair flies out of his seamed cap as he gets down on his knees and puts his soul into singing the song.

The cheers erupt louder and louder as Samrat's concert ends and the firecrackers light up outside the stadium.

Meanwhile, back in India, Ishani starts dancing on the bed with her earphones tucked.

Nayantara comes there and folds Ishani's clothes on her bed while watching her curiously.

She scolds her and says how come she is woken so early for this boy while their Paati (grandmother) joins the fun too.

Seeing Paati wear the black goggles, Nayantara scolds her too while Paati is only interested in Samrat and mock fights with Ishani, saying Samrat is hers.

Ishani gives up and says Samrat is theirs as they enjoy his songs together, forcing Nayantara to think what is so special in this boy.

On the other hand, as soon as Samrat steps off the stage, his fangirls crowd him and ask for an autograph.

However, one girl asks Samrat for a selfie and opens the camera without his permission.

As soon as Samrat sees his face in the selfie mirror, he puts his hand on the camera, tells the fangirl "No selfies!" and storms out hastily.

Mohit reveals that Samrat doesn't like his face as he also has no mirrors in his dressing room.

Samrat is then greeted by his sister, Aliya, in the greenroom who tells him congratulations for such a good show.

Mohit also joins them and calls Samrat his "boss" while congratulating but Samrat playfully gropes his neck and asks him to repeat himself again.

Mohit laughs while Aliya reminds him that he is her fiance first, then Samrat's friend, and lastly his manager.

Samrat releases Mohit with a smile while Aliya notices no engagement ring on Mohit's fingers.

She smashes the champagne bottle she was about to open for a celebration and screams at Mohit.

Samrat calms down Aliya first and then goes into the bathroom and fetches the ring.

He makes a story to save Mohit from Aliya's anger.

At Iyer House, Ishani takes Malti's blessings for her dancing auditions and goes off.

Malti then asks Chintu if he is going to the school or not but Chintu sadly reveals that the school asked for fees but he can manage by studying at home.

Hearing this, Nayantara gets sad and breaks her mud piggy bank to get the money she was saving for her new glasses.

She gives it to Chintu, asking him to pay this month's fee while Paati (Dadi) checks Nayantara's room and sees she broke her "gullak" (piggy bank).

Dadi lashes out at Nayan, then Malti, saying that because of her (Malti's) mistakes, Nayan has to suffer and reveals that she broke her piggy bank for Chintu's fees.

Dadi states that Malti didn't have to bring him home when his mother died in an accident as Chintu is Malti's late friends' son.

Paati leaves the hall angrily while Nayantara and Malti try to console Chintu by stroking his hair.

Chintu internally wishes that someday someone comes who can make everything good for them.

Meanwhile, Aliya reveals that "she" (name not revealed) is coming and Samrat gets excited and says if all preparations are done.

Aliya says yes and asks Samrat to make it quick and leaves the room.

After Aliya is gone, Mohit thanks Samrat for saving him today but Samrat unpredictably grabs his collar.

© Copyright tellybest.com, 2022, 2023. All Rights Reserved. Unauthorized use and/or duplication of any material from tellybest.com without written permission is strictly prohibited.
Cached Saved on: Wednesday 25th of January 2023 06:03:58 PMCached Disp on: Thursday 9th of February 2023 04:30:39 AM