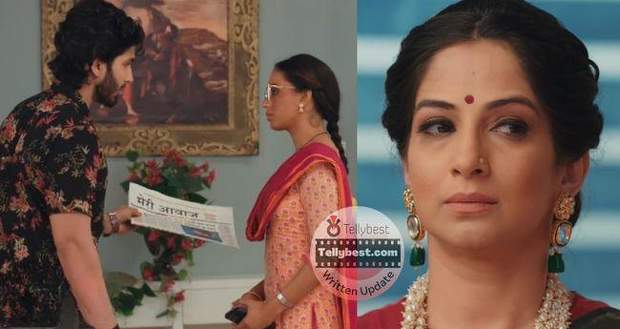 Today's Yeh Hai Chahatein 21st January 2023 episode starts with a jeep coming to a halt near Nayan while she shouts getting scared.

However, her expressions change to that of disgust once she sees Samrat coming out of the jeep.

She starts arguing with him when she realizes that he is not in jail and questions him.

He tells her that he is out on bail and warns her that she has harmed his reputation and fame the most.

He tells her that as revenge, he is also going to harm the most precious things to her.

Nayan tells him that she is not scared of him and he stops by the doors and asks her how is Chintu.

Nayantara takes it as a threat and holds Samrat by the collar while shouting to him that Chintu is only a child.

Nayan gets worried and takes an auto to Chintu's school where the security guard informs her that the kids have gone for a picnic.

Nayantara reaches the park and looks around for her brother but does not find him anywhere.

She further talks to a teacher who informs her that Chintu has gone to the cliffside to fly his kite with the other teacher.

She runs after the kid thinking that he is Chintu and also falls from the cliff.

She managed to hold onto a rock as she should for Chintu and gets worried.

Just then, her phone rings and she attends the call which is from the teacher.

The teacher apologizes as she informs her that Chintu had gone to the washroom and is with her now.

However, Nayan informs her that she saw a kid fall from the cliff and also fell herself to save the kid.

The teacher gets shocked as she tells her that she is sending a rescue team there.

Meanwhile, Nayan's hand slips and she falls more down where she manages to find the kid crying for his mother while sitting on a giant pocket-like structure between the wall and the rock.

She slides down to the kid and comforts him he cries in her arms and falls asleep.

The rescue team comes there and throws a rope whole Nayan ties it around her hand and climbs the cliff with the kid sleeping in her arms.

Later, at the hospital, the teacher thanks Nayan while she goes to call the mother of the kid, Prem.

Nayan thinks that even if she doesn't know the kid, she feels a connection and holds his tiny hand in her hand while he wakes up.

He asks her if she's an angel and if he's in heaven since he had wished to fly and go to heaven.

Nayan asks him why he wanted to talk to God while Prem reveals that he wanted to tell God to make his mother love him a lot and bring back his father since he doesn't live with them.

Nayan tells him that his mother loves him a lot and asks him what he would like to eat.

Prem naively says that he doesn't know since no one ever asked him.

Nayan goes to get a burger for him while thinking how cruel his parents must be to not ask him what he likes.

Back at the Choudhary mansion, Samrat is going through his cupboard when he notices a pink scarf and gets furious.

He picks up the scarf with fury and demands to know to put it in his cupboard.

The servants apologize as they state that they don't know while Revati comes there and calms Sam.

Sam tells Revati that she should know how much he hates the person to whom the scarf belongs while Revati tells him that it must have come into his luggage by mistake.

Revati tells him to forget her while Samrat thinks about Aliya and goes to check on her.

However, when she doesn't open the door, Sam opens it himself and gets shocked to see that Alia has hanged herself.

© Copyright tellybest.com, 2022, 2023. All Rights Reserved. Unauthorized use and/or duplication of any material from tellybest.com without written permission is strictly prohibited.
Cached Saved on: Wednesday 25th of January 2023 09:22:38 AMCached Disp on: Monday 6th of February 2023 05:39:16 AM