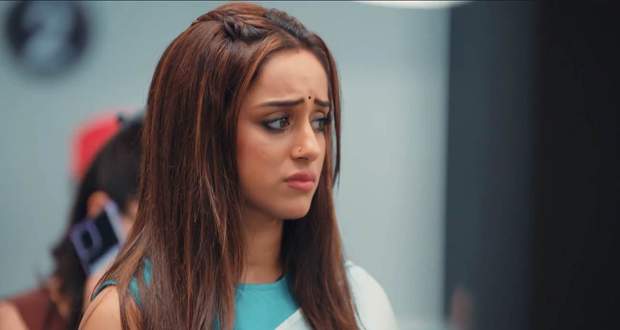 Today's Yeh Hai Chahatein 21st July 2022 episode starts with Preesha hugging Roohi and telling her that God listens to the prayer of children and that's why she could not leave.

Just then, Preesha sees Rudrakhsh and gets angry while Roohi tells her that Rudra is her father.

Preesha tells her that he hates Rudrakhsh and tells him to go.

Rudra comes to her and reminds Preesha of their love and all the time they have spent together.

All Preesha can remember, is how Rudra molested her, tortured her time and again and pushes him away from her.

She is having an attack and starts throwing things away and pushes everyone whoever comes in her way.

Roohi also goes to calm her but Preesha in her violent state pushes Roohi away as well which shocks Rudra and Roohi both.

Just then Preesha starts to spit foam and is about to fall down when Armaan catches her in his arms while Rudra stares at him helplessly.

Afterwards, Armaan tells Rudra to stay away from his wife or else he will send him to jail again and this time he will not be able to come out.

Meanwhile, Pihu is missing Preesha and talks about living without her when Armaan comes home with unconscious Preesha.

Armaan explains to them that Preesha refuses to go and Rudra and his children were there which caused Preesha’s attack.

Later, Armaan tells his uncle that today's episode with Rudra confirms that Preesha has forgotten them and now they can rest easy.

However, Armaan’s uncle tells him to be cautious of Rudra and his children who will go an extra mile for Preesha.

Rudra tells his children that they will not leave Preesha alone and will get to the bottom of the matter and bring Preesha back.

Meanwhile, Armaan comes to Preesha’s room and adds medicine to Preesha’s water and tells her about her attack.

Just then Pihu comes to say bye to Preesha and Preesha offers to accompany her to the gate.

Meanwhile, Vidhyut's father is angry at Vidhyuth for his irresponsible behaviour and accuses Rudra of having an influence on him.

Sharda defends Rudra and tells Vidhyuth’s father that Rudra is the best child a mother can have and he respects women a lot.

Meanwhile, Rudra extracts Preesha from her house with the help of Vanshika and takes her to a clinic.

© Copyright tellybest.com, 2020, 2021. All Rights Reserved. Unauthorized use and/or duplication of any material from tellybest.com without written permission is strictly prohibited.
Cached Saved on: Sunday 2nd of October 2022 05:14:47 PMCached Disp on: Thursday 6th of October 2022 03:18:30 PM