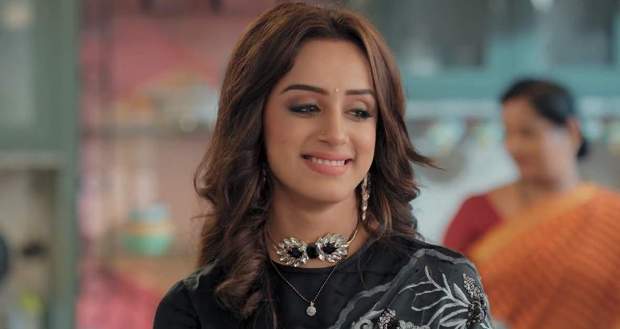 However, Preesha’s hair covers her face preventing Rudra to take a proper look at her.

Meanwhile, Armaan calls Preesha and scolds her for going to Delhi without seeking his permission.

Preesha says if she had asked him, he wouldn’t have allowed her.

After Armaan cools down a little, he asks if Preesha packed her medicines and Preesha says yes.

However, Armaan loses his calm again when he sees the news showcasing Rudra at the same college where Preesha and Pihu are.

Armaan tells his uncle that if Rudra gets to know that Preesha has lost her memories, he will desperately try to make her remember them.

On the spot, Armaan decides to go to Delhi to prevent Rudra from meeting Preesha.

Later, the college orientation begins and Preesha and Rudra sit very close but do not know about each other’s presence.

He asks Preesha if something else happened making Preesha say what kind of a weird question it is.

Preesha hands the phone to Pihu but Armaan cuts it as soon as he sees Rudra’s face in the background.

Meanwhile, Rudra is having dinner just across Preesha and Pihu’s table with Raj.

Suddenly, a professor asks Pihu and her guardian, Preesha, to come on stage because Pihu has received a full scholarship.

However, when it is Pihu’s chance to go on stage, Preesha starts coughing all of a sudden.

She goes to the washroom whose lock is dysfunctional.

Preesha starts asking for help when she finds herself locked but Rudra luckily hears her.

Rudra does not know it is Preesha asking for help as he tells her to wait so he can bring people to open the door.

However, they are here to keep an eye on Preesha.

On the other hand, Rudra goes to the principal’s office and tells him about the lock in the washroom.

With the help of housekeeping staff, Rudra opens the door but does not find the woman inside who was asking for help.

However, one of the staff informs Rudra that someone had already come to save the woman locked inside the washroom and took her away.