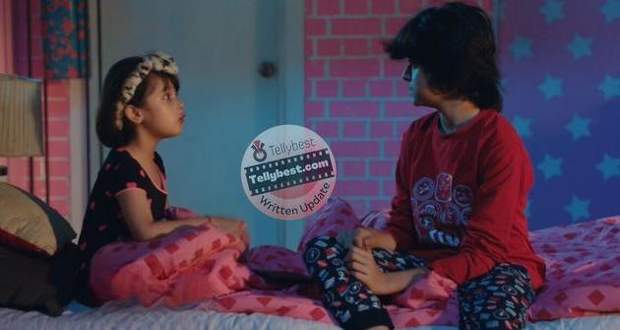 He finally gives in & lets both Ruhi & Saaransh know that he still loves Preesha.

A flashback is seen on the day of Rudra & Pihu's marriage where he denied signing the marriage paper in the court.

He takes Pihu alone in a room and tells her that he cannot marry her.

However, Pihu asks Rudra to open his eyes and see how money-hungry Preesha is to marry Arman for money.

Pihu cries as she feels betrayed by Rudra at the last moment. She tells him that she doesn't want to live anymore.

Rudra then asks her to be strong for the child inside her stomach & promises Pihu that he will treat her as Khurana House's bahu only.

Ruhi apologises to Rudra for suspecting him & feels happy that he still loves Preesha.

Rudra reminds his little Ruhi that he also loves her & Saaransh.

They all make a team to expose Arman by first getting the deleted video where Arman is touching Preesha inappropriately.

All of them go to Rudra's professional friends who get the deleted video saved again in Ruhi's phone.

When Rudra sees it, his eyes glow with anger.

Later, they return to Khurana House and Ruhi excitedly runs inside it with her phone in hand.

However, she falls down due to Pihu walking her way.

Ruhi's phone gets thrown on the floor while the tea Pihu was carrying gets spilt all over it.

Ruhi fumes her nostrils in anger and asks Pihu whether she knew how important her phone is or not.

A flashback is seen where Armaan talks to Pihu in his normal tone & she catches him red-handed.

He asks Pihu to not tell anyone as these kids know his truth now.

Pihu smirks once Arman says he has done all this to be closer to Preesha.

Both the sister & brother strike a deal to work together to keep RuSha apart.

However, Arman hears Rudra talk about exposing him and realises that he has seen the video Ruhi shot.

He then asks Pihu to do something and she spills the tea, breaking Ruhi's phone.

Flashback ends as both Pihu & Arman smirk to themselves.