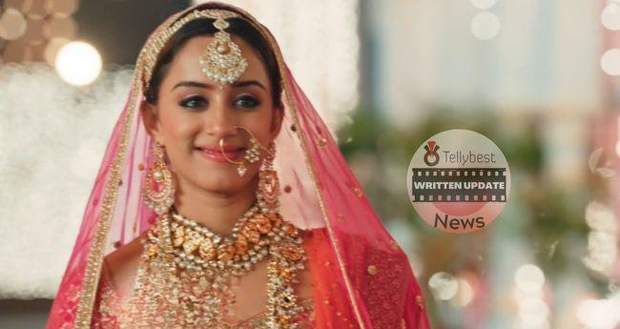 Today's Yeh Hai Chahatein 21st October 2022 episode starts with the jeweler coming to the Khurana mansion and telling Rudra that he has brought the necklace that Vidyut ordered from him.

Rudra gets surprised to see such an expensive necklace and wonders where Vidyut got the money.

Just then, the accountant arrives and informs Rudra that Vidyut asked him to transfer 50 lakhs to the jeweler.

Rudra gets furious as Vidyut used his name without his permission and spots Vidyut coming down the stairs.

Rudra asks Vidyut why he ordered the necklace without informing him to which Vidyut replies that he did not order the necklace.

Both the jeweler and the accountant accuse Vidyut of calling them and asking them to prepare the necklace and the money.

Vidyut denies doing anything like that but Rudra does not believe in him and gets angry with him.

Seeing Rudra’s attitude toward him, Vidyut also flips and shouts at Rudra for not believing in him while throwing baseless threats.

Raj feels satisfied as his plan to turn Rudra against Vidyut seems to be working well.

Preesha witnesses the entire situation from the stairs and decides to talk with Rudra after hearing Vidyut threatening to kill him.

However, Preesha receives a message and decides to go to Armaan first as that matter needs to be resolved.

Preesha meets Armaan in the jail and asks him how he knows about her child when it was Revati who took it away.

Armaan tells Preesha he was working with Revati and gave her the injection at the hospital because he wanted to have her.

Preesha finds herself in turmoil after Armaan demands to get out of jail without any criminal charges in exchange for the information.

Armaan warns Preesha not to tell Rudra anything or else she will not see her baby anymore.

Preesha agrees to get him out of there and takes the time of two days and leaves after signing in some form at the counter.

Meanwhile, Pihu gets to know about the incident and assures Vidyut that she believes in him and that he is innocent.

Pihu takes Vidyut to Rudra and requests Rudra to listen to Vidyut as she believes that he is innocent in this case.

Vidyut enters the room and pleads to Rudra about his innocence by dropping to his knees.

Rudra asks Vidyut to get up and believes that he is innocent which raises the question that who is the one behind the conspiracy.

© Copyright tellybest.com, 2022, 2023. All Rights Reserved. Unauthorized use and/or duplication of any material from tellybest.com without written permission is strictly prohibited.
Cached Saved on: Monday 21st of November 2022 06:36:02 AMCached Disp on: Sunday 4th of December 2022 11:25:53 PM