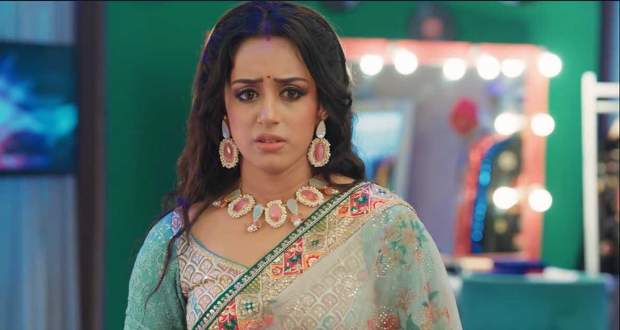 Revati insists that she'll drop them off and Rudraksh thanks her while telling Preesha that they'll discard the body when Revati isn't looking and sits in the car.

Meanwhile, Alia calls Saaransh and informs him that Revati has found out about Dev's crimes and is going to the hospital to talk to him.

Saaransh calls Rudraksh and informs him of Revati going to the hospital to talk to Dev.

Just then, the car stops and Revati informs them that there is a checking a little ahead.

Revati goes out to talk to the police officers while Preesha starts freaking out saying that they will be caught.

However, Rudraksh angrily tells her to keep calm or they will be caught.

Revati comes back and they go for the check when the police officer tells Revati that she can go.

However, Revati says that she is also a citizen and opens the trunk for them to check making Preesha and Rudraksh worry.

The constable from behind shouts to the inspector that there is something in the trunk making Rudraksh and Preesha panic.

However, the inspector apologizes to Revati saying that they have to check the car behind them, and lets them go making Rudraksh sigh in relief.

Revati drops off Rudraksh and Preesha at their house but Rudraksh insists she come inside for a cup of coffee.

Inside the Khurana mansion, Revati gets a call from Rakesh and she tells him to meet her at the hospital as she has something important to talk about.

Revati leaves while Preesha messages Rudraksh that Revati is leaving.

Preesha and Revati go out and see Rudraksh doing something near the trunk and questions him.

However, Rudraksh makes an excuse that he was checking out the tires of the car.

Rudraksh tells Preesha that the body is still inside the car when she notices the blood coming out from the trunk and informs Rudraksh of it.