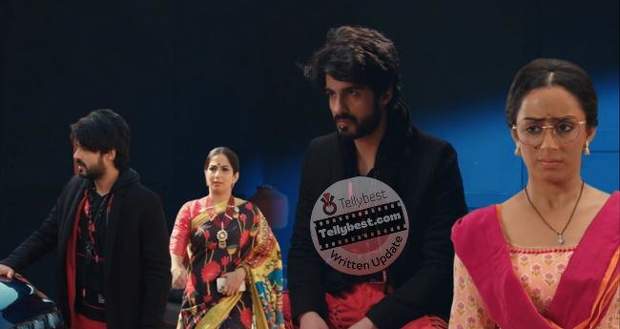 Today's Yeh Hai Chahatein 22nd January 2023 episode starts with Samrat putting Aaliya down on the bed while Revati rushes her and cries seeing her daughter in such a state.

Revati takes the note from Aliya's hand and reads it as she states that she tried to commit suicide because of Mohit and Ishaani breaking her heart.

Samrat angrily says that he won't leave them while Revati tells him that they should take Alia to a hospital.

Meanwhile, at the hospital, the teacher is speaking to Prem's mother who refuses to come to the hospital stating that she doesn't need to come there if Prem is fine now.

Nayan gets angry and takes the phone from the teacher to talk to Prem's mother who is painting her nail while lying about being busy with house chores.

Nayan tells her that she should come to the hospital as her child is more important than work.

However, Prem's mother, who is wearing a necklace with 'M' on it tells Nayan that she does not need a certificate from her on her being a good mother or not and disconnects the call.

Nayan calls her rude and careless about Prem while the teacher reveals that she has always been like that.

Meanwhile, the Iyer family returns to their renovated house while Malti asks about Nayantara.

However, Ishaani explains to her that the interviews get dragged if there are more candidates.

Back at the hospital, Samrat and Revthi rush Aaliya to the hospital while the doctor checks her pulse and rushes her making Sam and Revati worry even more.

At the same time, Nayantara gazes at Prem adoringly while telling him that he was so hungry since his mother forgot to pack lunch for him.

Nayan thinks that Prem needs someone who loves him unconditionally and tells Prem that she is going out of the room to attend her mother's call.

However, before she can attend Malti's call, Nayantara's eyes land on Sam and Revati begging the doctor to help Aaliya who is lying on the stretcher.

Nayantara asks him what happened to Aaliya while Sam starts shouting at her that she is the reason for Aliya trying to commit suicide.

Samrat angrily rebukes Nayan while telling her that she supported Mohit and Ishaani who continuously broke Alia's heart and gave her fake hope leading her to take this step.

He calls the Iyer sisters hypocrite while Nayan apologizes and asks Samrat why he didn't try to stop Aliya from taking such a step.

Samrat tells her to shut up and threatens to kill her if anything happens to Aaliya.

Back at the Iyer house, Mohit and Ishaani go to her room and flirt while Chintu interrupts them and states that he is there for his books.

Meanwhile, Mohit and Ishaani again try to get romantic but get interrupted by Paati who jokes that she won't disturb them after taking her things.

Nayantara asks Samrat what he is going to do Ishaani and Mohit while Sam states that he has already done what he wanted to do.

The police interrupt Ishaani and Mohit's romance and arrest them for abatement to the suicide of Aliya Choudhary.

At the hospital, Samrat quotes Nayan and tells her that the laws are the same for everyone in India and states that Mohit and Ishaani will be getting arrested for instigating Aaliya to commit suicide.

Malti cries as the police arrest Mohit and Ishaani and takes them away.

At the hospital, Nayantara accuses Samrat of falsely getting Ishaani and Mohit jailed and states that she will save them.

However, Sam states that she cannot do anything this time.

© Copyright tellybest.com, 2022, 2023. All Rights Reserved. Unauthorized use and/or duplication of any material from tellybest.com without written permission is strictly prohibited.
Cached Saved on: Wednesday 25th of January 2023 12:30:40 PMCached Disp on: Monday 6th of February 2023 04:36:14 AM