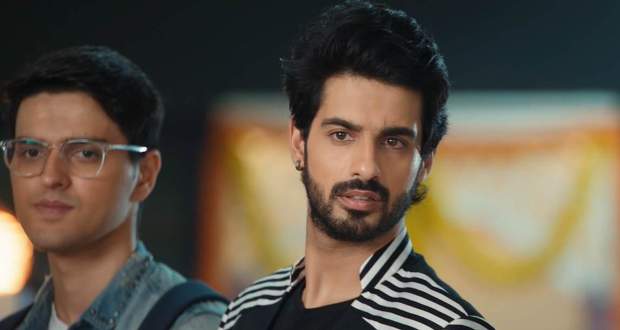 Today's Yeh Hai Chahatein 22nd June 2022 episode starts with Armaan brings an unconscious Preesha to their car while the family gets worried about her.

Pihu tells him that Preesha was uncomfortable after smelling the bouquet while Armaan knows that it is because Preesha must have something to do with Rudraksh.

Flashback shows, Armaan getting the warden to unlock the bathroom before Rudraksh can see Preesha and returning to the car.

Back in the present, Raj thanks Rudra for coming to the orientation while Vidyut comes there and greets him.

Meanwhile, Preesha regains unconsciousness reveals to the family what happened.

Armaan tells Preesha that she should return to Mumbai but she refuses and Armaan lastly decides that he will stay with Preesha till she's in Delhi.

Meanwhile, at the college, Pihu collides with Raj and starts accusing him of intentionally touching her waist.

Just then, Vidyut comes there and stands up for Raj but starts bullying Pihu ordering her to bow down to him and show him respect.

However, Pihu fights back by tying Vidyut's shoelaces together and making him fall after which she tells him that he needs to earn her respect.

Pihu leaves from there while Vidyut tells Raj that the girl (Pihu) is going to pay for what she's done.

Elsewhere, Rudra is recording his song while Roohi calls Rudra's manager, Vanshika, and asks her if Rudra hasn't eaten anything.

Roohi says that she has a plan and later Vanshika lies to Rudra that they have to do an ad commercial of him eating food.

However, during the shoot, Rudra realizes that the food is sent from his home and confronts Vanshika.

Just then, Roohi reveals herself and tells him that it was all her plan as he didn't pick up her calls.

Further, she makes both Rudraksh and Vanshika sit and eat with her.

Later at night, Pihu tells Preesha and Armaan about the prank she pulled on Vidyut and they decide to go out for ice cream as a celebration.

Elsewhere, Roohi also requests Rudra to get her ice cream and he agrees while remembering Preesha.

© Copyright tellybest.com, 2022, 2023. All Rights Reserved. Unauthorized use and/or duplication of any material from tellybest.com without written permission is strictly prohibited.
Cached Saved on: Monday 21st of November 2022 06:00:54 PMCached Disp on: Monday 5th of December 2022 12:58:20 PM