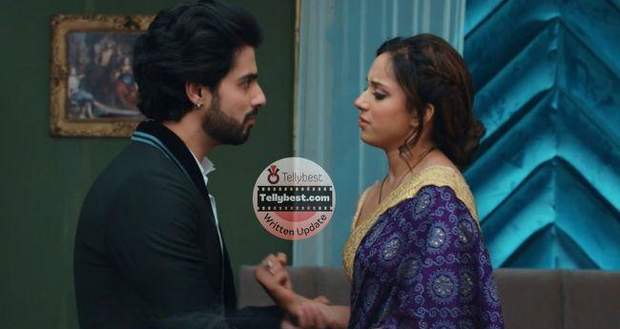 Today's Yeh Hai Chahatein 22nd November 2022 episode starts with the mobile technician telling Rudra that his mobile is useless and will not start now.

Saransh and Roohi get worried about exposing Arman to Preesha as there is no evidence left to show.

Rudraksha tells them to not worry as they will create a new proof.

Rudra tells them that they will have to do something to get Armaan to forget his acting for a while.

On being asked, Rudra tells them that he will use fear of death to scare Arman and he will forget himself in order to save himself from the threat.

Later, Rudra, Ruhi and Saransh plan for Ruhi’s birthday party saying Rudra was not present on her birthday.

Rudra also invites Preesha and Arman to the party saying it will not look good if all the children enjoy themselves while Armaan watches them from afar.

The next day, everyone gathers for the party and the party is in full swing when Roohi shows concern to Rudra about his plans.

Later, after the cake cutting, Rudra sends the cake to Preesha and later approaches her seeing cream on her face.

He congratulates Preesha for their children playing together whereas Preesha gets angry for calling Armaan her child.

Later, Rudra comes very close to Preesha to wipe off the cream from her face while Preesha feels mesmerised by her nearness and looks longingly into Rudra’s eyes.

After a while, Preesha asks Rudra what is he doing standing so close to her while Rudra tells her that he is a good father and cleans Preesha’s face so that they do not feel embarrassed.

However, Preesha stamps on his feet and goes away while Saaransh laughs at Rudra.

Saransh teases Rudra for losing his charm while Rudra sight excuses of being distracted by their plan against Armaan.

Later, the joker plays jokes and sings and dances for the children.

After a while, the joker introduces the children to the bouncy house and asks everyone to wear jackets.

Roohi insists to Armaan to join them in the bouncy house while Arman refuses saying he is afraid of the heights.

Roohi tells her that there is nothing to worry about as a small girl like her will be going there.

Later, on Preesha’s insistence, Armaan has no choice but to climb the bouncy house.

The Joker offer him a safety jacket while Armaan cringes at the thought of playing like kids.

© Copyright tellybest.com, 2022, 2023. All Rights Reserved. Unauthorized use and/or duplication of any material from tellybest.com without written permission is strictly prohibited.
Cached Saved on: Tuesday 22nd of November 2022 11:29:28 PMCached Disp on: Tuesday 6th of December 2022 12:22:01 PM