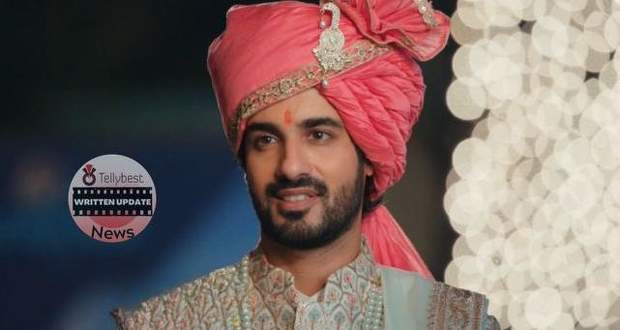 However, Rudra consoles Vidyut by stating that they will find the culprit after the marriage is done.

He thanks her for supporting him while Raj gets jealous & decides to do something to separate them.

Later, Sharda scolds Rudra to get ready while he is looking for Preesha to come.

Just then, Preesha arrives at the venue and tells Rudra she got late as bridal hair & make-up take some time.

Rudra hugs her tightly and says he cannot live without her.

Preesha then tells Rudra she has something to talk about but Sharda scolds both of them to hurry up for the wedding.

Meanwhile, Raj spikes Pihu's juice so he can take her to a separate room and make it seem to Vidyut that Pihu was romancing him.

On the other hand, Vidyut teases Rudra for being nervous while Rudra tells him he is going to feel the same when he marries Pihu.

At the venue, Shardha calls Preesha an 'angel' as she helps her dress up, putting a Kala 'tika' behind her ear.

Afterward, Vidyut finds Pihu just in time who tells him that she feels like fainting.

Raj curses Vidyut as he sees his plan fail.

Vidyut then takes Pihu to a bathroom and asks her to take a cold shower so the heaviness from her head fades away.

In the shower, Pihu hugs Vidyut as his back faces her.

However, she makes him turn around as he slowly grabs her waist.

Pihu smiles when she feels his lips touch her neck.

However, Vidyut pulls himself back before things escalate between them.

Outside the shower, Pihu kisses Vidyut's cheek and lays on the bed with Vidyut on top of her.

On the other hand, Ruhi & Saaransh compliment their mother for looking so pretty as they all wait for Rudra to arrive with the 'baarat'.

Just then, a very old-looking man who is Arman in disguise forgets a trolley that he places in front of Rudra's car.

However, Raj removes it while Rudra comes out of the car and dances with the baarat.

Internally, Preesha prays that Rudra stays with her forever & they find their baby together.

Just then, a car blast happens, waking both Pihu & Vidyut who fell asleep naked after having an intimate time.

Several parts of the car burn on the road while Preesha screams for Rudra.

© Copyright tellybest.com, 2022, 2023. All Rights Reserved. Unauthorized use and/or duplication of any material from tellybest.com without written permission is strictly prohibited.
Cached Saved on: Monday 21st of November 2022 07:33:00 AMCached Disp on: Thursday 1st of December 2022 12:49:27 PM