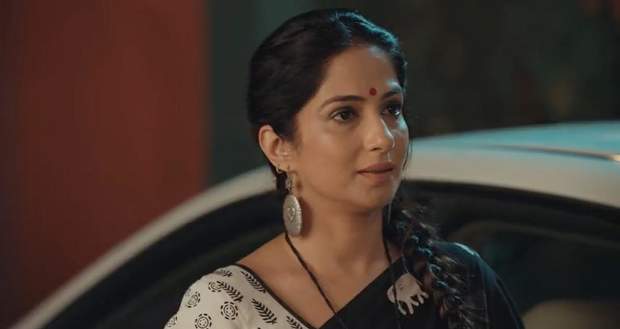 At the hospital, Revati and Rakesh reach Dev's hospital and Revati demands Dev to wake up seeing the blanket covering the bed.

However, after no response, Revati removes the blanket to see only the pillows.

Rakesh tries to calm Revati while she calls Alia and asks if Dev is at home but learns that he is not at home also.

The nurse comes just then and informs Revati that Dev is not in the hospital and gives her Dev's hospital uniform that she found.

Alia calls Saaransh and further warns him that Dev is not at the hospital.

Dev calls Rudraksh and informs him of Alia's call after which Rudraksh tells Preesha to distract Revati and Rakesh while he takes care of Dev's body.

They reach the hospital and Preesha goes inside while Rudraksh goes behind the parking lot so that he can't be seen entering.

Preesha goes to Revati and says that she found out about Dev missing through Alia's call and asks her if she's fine.

Just then, a police officer comes there and informs Revati that the work she assigned is done.

Revati gives Dev's hospital uniform to the police officer and leaves after him.

Later, Preesha comes outside and asks Revati what is happening as Revati informs her that they have specially trained dogs who will find Dev.

The dogs are let off the leash and they go towards Revati's car but later stop near a piece of meat.

Revati gets frustrated while the police inspector says that the scent of the meat is strong and it might take some time before they can investigate again.

Later, Preesha asks Rudraksh what happened and he reveals how he heard the dogs and removed the blood stain with his waistcoat, and further bought the meat from the nearby butcher shop to misguide the dogs.

Preesha questions Rudraksh about where his waistcoat is while he looks confused.

© Copyright tellybest.com, 2020, 2021. All Rights Reserved. Unauthorized use and/or duplication of any material from tellybest.com without written permission is strictly prohibited.
Cached Saved on: Sunday 2nd of October 2022 06:35:43 AM