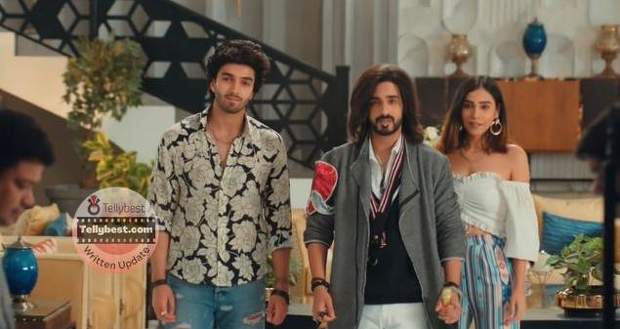 Today's Yeh Hai Chahatein 23rd December 2022 episode starts with Nayantara leaving the hotel and also scolding Ishaani on the way for picking up the brand new phone of the so-called dance instructor.

Ishani says that the next time he does something like this, she wants him to remember Ishani Iyer.

In London, Mohit asks Seema why they cannot go to India, and Seema says they cannot since it is the place where Revthi Ma'am lost everything and also brought them from the streets.

Mohit huffs and sits down on the bed, telling Seema (his mother) that he doesn't love Aliya and only got engaged to her since Seema forced him to remember everything Revthi did for them.

Mohit reveals that he feels suffocated due to Revthi showing how much she did for them.

Seema questions him if he is out of his mind as after his father (Subod, the police inspector who helped Revthi to do the bomb blast) died, Revthi urged them to start a fresh life in London as she was leaving India forever.

Meanwhile, Samrat gets Revthi into her room where she yells at him for always supporting Aliya whether she is right or wrong.

Revthi pretends to act tense and says he knows the reason for her not going to India very well.

Samrat nods and angrily says it is because of his biological father, Rudra, while Revthi smiles secretly.

Samrat calls Rudra a rascal and recalls how he intentionally trapped Revthi's husband in a drug case but she still adopted her biggest enemy's son.

Samrat gets teary while Revthi pretends to be the best mother on Earth, saying she couldn't resist Samrat's innocent eyes.

Samrat says that he doesn't even look at his face in the mirror since he got everything from Rudra and tells Revthi that if God is there, she is God for him.

Meanwhile, in India, Ishani is chatting with Mohit, Samrat's manager, telling Nayantara that if she impresses them with her dance audition, they might call her to London to be in Samrat's dancers team for his concerts.

Back in London, Samrat hugs Revthi and she asks him to go join his friends.

After he leaves, Revthi speaks to herself with a loud laugh that Samrat thinks he is nothing like Rudra, but he is LIKE Rudra.

She wickedly says that Samrat has the same innocence as Rudra and she has been tricking him for twenty years just like she tricked Rudra into believing that she didn't have his baby.

Revthi then recalls how she escaped the police van after the bomb blast happened and then went to Subod's wife, Seema, and pretended to be their savior, asking her to come to London if she wanted to start a new life.

Revthi smirks, saying if Rudra had love inside his heart, Samrat only has anger and hatred.

Meanwhile, Samrat is seen splashing his orange juice at the servant who mixed sugar into it and fires him immediately.

As Revthi goes on speaking to herself, revealing Samrat's facets of being a womanizer unlike Rudra who respected women a lot, Samrat is seen with two girls in a club.

He humiliates the other and cozies up with another on his arm.

Later, he is drunk and slaps the club's manager who suggests he take a taxi and not drive alone.

Revthi says that Samrat knows no love in his life because this is how she raised him to be and he only knows how to honor Revthi, otherwise, everyone else is beneath his rockstar feet.