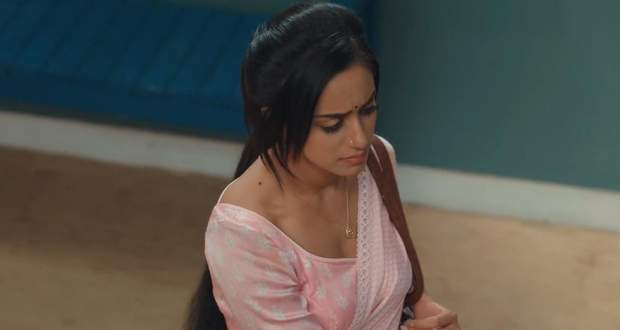 Preesha pretends to know about Bunty’s truth. However, she tries to play it normally.

At first, Preesha asks Bunty why did he lie. Bunty gets shocked and confused at the same time and asks Preesha what does she mean by a ‘lie’.

Preesha then tells Bunty she knows about Bubbles’ truth.

Preesha informs Bunty that she met Bubbles at the hospital and knows how critical her situation is.

Bunty asks Preesha about some papers that went missing from his house.

Preesha tells Bunty she has no clue about them and the latter decides to walk out of Preesha’s house.

Just then, Preesha raises the scam papers in the air, catching Bunty off-guard.

Bubbles have already told the truth to Preesha and the latter narrates it to Bunty.

Bunty did the scholarship scam to get huge sums of money that paid for Bubbles’ recovery and Kidney treatment.

Preesha is just about to call Rudra when Bunty raises a glass object to hit Preesha’s head with.

Rudra stops Bunty and the latter gets the biggest shock of his life.

Rudra delivers two punches to Bunty and asks him the need to do this scam when Bunty could have easily asked for money from Rudra.

Bunty tells Rudra that Rudra has already done enough for Bunty and the former cannot afford to ask for more favors.

Police arrive on the scene to arrest Bunty. Bunty begs but Rudra does not dither.

He then escapes, leaving Preesha and Rudra alone as the police officers try to catch him.