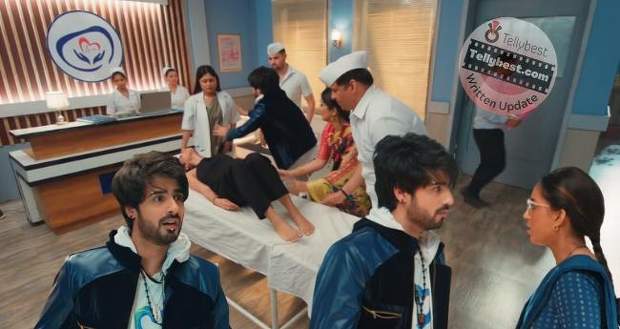 Today's Yeh Hai Chahatein 23rd January 2023 episode starts with Nayan getting worried as she calls Ishaani and Mohit to ask them if they are fine.

As no one picks up their call, Nayan gets worried and calls Malti.

Malti cries to Nayan that she was just about to call her and informs her that Ishaani and Mohit have been arrested.

Nayan calms Malti as she states that she is at the hospital and that Samrat is the one who had sent the police.

She also informs Malti that Aaliya is in a serious condition and that she will go to the police station.

Nayan stops in her tracks as she hears the doctor telling Revati and Sam to come into the operating room quickly.

Meanwhile, Samrat is scolding Aliya for taking such a drastic step and Revati cries for her daughter.

Samrat tells her that he won't leave the people responsible for it.

Aliya does not respond to anything which makes Samrat question the doctor who reveals that Aliya has been paralyzed for life due to the loss of oxygen reaching the brain.

The doctor realistically states to Samrat that they can do an operation on Aliya but that doesn't guarantee that Aliya will be cured.

As the doctor leaves, Samrat consoles Revati as he states that he will make the people's life hell who put his sister in this condition.

He drags Nayan inside and tells her to look at Aliya while telling her to see what her, Mohit and Mohit's planning and plotting led to.

Samrat threatens her that he will avenge Mohit & Ishani and will not leave her either.

Later, Nayan goes to meet Ishaani and Mohit at the police station.

Mohit explains to Nayantara how stubborn Aliya is due to being spoiled by Revathi and Samrat.

However, Nayantara tells him that Aliya is suffering badly.

Ishaani complains that they are suffering too and Nayantara states that the reason for their suffering is Samrat. She assures them that she will get them out of jail soon.

Further, Samrat comes to the police station and calls Mohit, Ishaani, and Nayantara out of the meeting room to insult them.

Nayantara gets worried on hearing Samrat who tells them that he has put the attempt to murder charges against Mohit and Ishaani.

Meanwhile, Samrat thinks about the moment when Revathi brainwashes him for putting Mohit & Ishaani behind the bars for long term.

Revathi manipulates him against Nayantara and asks him to punish Nayan as well.

Samrat promises her that he will do exactly the same thing.

Revathi smiles wickedly at the success of her plan.

Samrat gets pulled to the present when Nayantara argues with the police officer about how the charges can be put just like that.

He shouts at her that his sister is lying half dead on the hospital bed as she was mentally tortured by Mohit and Ishaani.

Inspector says that he is filing the complaint and putting Mohit & Ishaani in jail while Nayantara reassures them that she will get them out.

However, Samrat drags Nayantara out of the police station and takes her to the hospital while she keeps protesting and asking where he is driving.

Reaching the hospital, Nayantara gets confused as to why he brought her here.

Samrat announces that from now onwards Nayantara will be her caretaker & secretary as she is his wife, Chaudhary's daughter-in-law, and Aliya's sister-in-law.

She will do everything for Aliya if she wants Samrat to lessen the charges put against Mohit & Ishaani.

Meanwhile, Revathi enjoys watching Samrat ill treating Nayantara as he is doing what she had wanted.

© Copyright tellybest.com, 2022, 2023. All Rights Reserved. Unauthorized use and/or duplication of any material from tellybest.com without written permission is strictly prohibited.
Cached Saved on: Wednesday 25th of January 2023 08:46:25 AMCached Disp on: Monday 6th of February 2023 04:29:33 AM