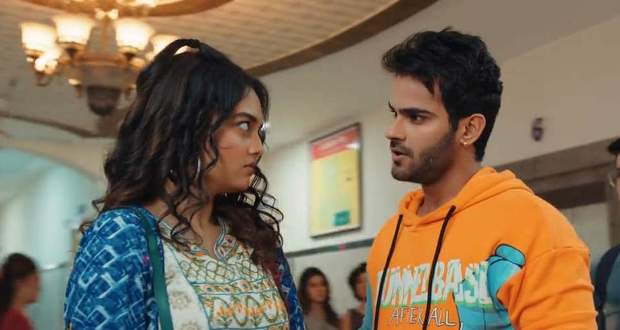 However, seeing Rudra arrive with Roohi at the same shop, Armaan intentionally pushes his ice cream on Preesha’s pallu, making it dirty.

Armaan apologizes and tells Preesha they should go home now so Preesha can change.

After Armaan leaves with Preesha and Pihu, Rudra and Roohi sit on the same spot.

With "P" written on it, Roohi immediately recognizes it to be Preesha’s and tells Rudra she wants to go home.

At home, Saaransh finds Roohi sitting upset on the bed.

Roohi shows her handkerchief with "R" written on it and Saaransh says "P" stands for Preesha on the handkerchief Roohi found on the road.

However, Roohi tells Saaransh not to tell anything about this to Rudra as they have to confirm it first.

Saaransh is positive and tells Roohi they will search for Preesha together after school.

The next day, Vidyut pulls a prank on Pihu appearing to be unconscious after a gas leak in the lab.

When no one helps Vidyut, Pihu volunteers to give Vidyut CPR and he wakes up a second later with a smirk on his face.

Vidyut asks everyone if they recorded Pihu giving him a kiss but Pihu says she was just trying to save his life.

However, Pihu slaps him and tells everyone to record this too and release both the videos together.

Before leaving Pihu threatens Vidyut she will complain about him to the principal with Krish advising Pihu to drop the matter.

However, Pihu refuses and Vidyut promises to reply to Pihu’s slap shortly.

After school, Saaransh and Roohi show the vendors Preesha’s picture if they saw her last night.

Saaransh loses hope but Roohi spots a CCTV camera and tells Saaransh they can check the footage.

On the other hand, Preesha gets angry when Pihu tells her what Vidyut did.

At the same time, Rudra gets the principal’s call after Pihu complains about Vidyut.

However, Vidyut refuses to apologize to Pihu at Rudra’s behest.

Meanwhile, Roohi and Saaransh request the ice-cream vendor to show them the CCTV footage of last night so they can confirm if Preesha visited the shop or not.

Seeing their tears, the shopkeeper agrees.

© Copyright tellybest.com, 2022, 2023. All Rights Reserved. Unauthorized use and/or duplication of any material from tellybest.com without written permission is strictly prohibited.
Cached Saved on: Monday 21st of November 2022 05:34:02 PMCached Disp on: Monday 5th of December 2022 12:51:26 PM