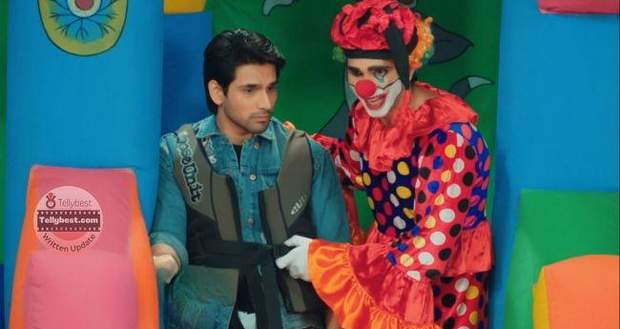 Today's Yeh Hai Chahatein 23rd November 2022 episode starts with the joker holding Arman’s hand and threatening to blast him off with a bomb.

Arman actually worries about himself, thinking that it is Rudra & his kids’ plan.

Meanwhile, Rudra is proud of pulling this task and just wants Arman’s cover to blow up as soon as possible.

On the other hand, Preesha is worrying about Arman as he calls out for help.

The joker asks for a ransom of one crore rupees.

A flashback is shown where Pihu goes to alert Arman about Rudra suspecting him.

However, Arman thanks Pihu lightly and forgets about it.

Preesha gets agitated and thinks she cannot let anything happen to Arman because he only knows her baby’s location.

She asks Rudra to help her get one crore but Rudra asks her if she is out of mind.

A flashback is shown where Rudra tells his kids that the joker will have to put a fake bomb jacket around Arman to scare him.

The flashback ends with Preesha collecting all her jewelry in one cloth to pay a ransom of one crore rupees.

However, it is still not enough. Digvijay then tells Preesha that he will try to talk to the joker but Preesha jumps into the kids' play tent where the joker has held Arman hostage.

She pushes him off and holds Arman’s hand as the bomb is ticking away.

Rudra gets confused to see Preesha put herself in danger for a man like Arman.

Meanwhile, Arman thinks of escaping the whole situation as he doesn’t want to die with Preesha who is stupid to think everything will be alright as she holds the bomb jacket in her hand.

She firmly holds his hand while he can only utter “Preesha aunty”.

Before the timer goes up, Preesha flung the jacket into the air and it blasts into confetti.

Everyone covers their ears as Pihu whispers to Rudra & the kids that Preesha loved Arman very passionately.

The joker smiles and says he only said a blast will occur, not a bomb blast. Just then, Preesha slaps his face.

© Copyright tellybest.com, 2022, 2023. All Rights Reserved. Unauthorized use and/or duplication of any material from tellybest.com without written permission is strictly prohibited.
Cached Saved on: Wednesday 23rd of November 2022 11:20:59 PMCached Disp on: Thursday 1st of December 2022 01:36:10 AM