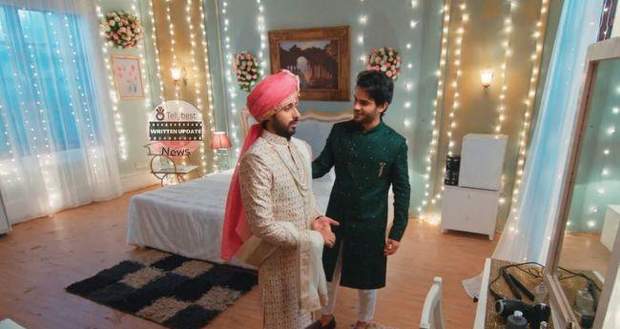 Today's Yeh Hai Chahatein 23rd October 2022 episode starts with Preesha racing toward the burning bodies while Raj asks her not to go.

Sharda cries along with Ruhi & Saaransh who feel helpless in the situation.

In a flashback, Arman gets from one of the police officers at the station who gives him a different costume.

The officer then brings a guy wearing Arman's clothes to be in his cell by the time he goes out and plants the bomb in Rudra's car.

The flashback ends as Arman says no one will suspect him since they think he is inside the jail.

The next day, everyone surrounds Preesha who is resting in bed, remembering how Rudra danced at the venue before the car blast.

She wakes up with a scream and just then a police officer informs her that Rudra is dead now.

Vidyut & Raj cover their mouth shockingly while Preesha tells the officer this is not true along with Sharda who doesn't believe this information.

However, the officer let them know that if he were alive, his body would have been found whereas the car portions were found in the lake.

Hope ignites inside Preesha as she says if car portions are in a lake, Rudra might have fallen there too.

However, the officer says that the lake has numerous crocodiles that don't leave any chance for a human to survive.

Preesha stays adamant and goes to the lake location where the divers are searching for his body.

Preesha's body gives up when the divers do not find anything inside the lake.

At Khurana House, Preesha lies on the bed in a desperate condition and hallucinates Rudra asking her to get up as they are late for their marriage.

Sharda & the kids enter to hold a screaming Preesha in one place.

Seeing them dressed in white, Preesha gets angry and states she won't wear white as she is the Dulhan and Rudra is alive too.

Saaransh cries and tells Preesha he is dead since one of Rudra's footwear could be found near the bomb blast site.

Meanwhile, Pihu tries to console a crying Vidyut who states if he was with Rudra, he wouldn't let this happen.

Vidyut informs Pihu that Rudra knew everything about their relationship and cries, remembering how he promised to do their marriage.

Suddenly, Vidyut says it is only Arman who was Rudra's enemy and killed him.

Later, the police come and ask Preesha who could be scheming against Rudra and she takes Arman's name.

The police say this is not possible since Arman is in jail while Vidyut supports her.

© Copyright tellybest.com, 2022, 2023. All Rights Reserved. Unauthorized use and/or duplication of any material from tellybest.com without written permission is strictly prohibited.
Cached Saved on: Monday 21st of November 2022 06:22:22 AMCached Disp on: Thursday 1st of December 2022 12:43:10 PM