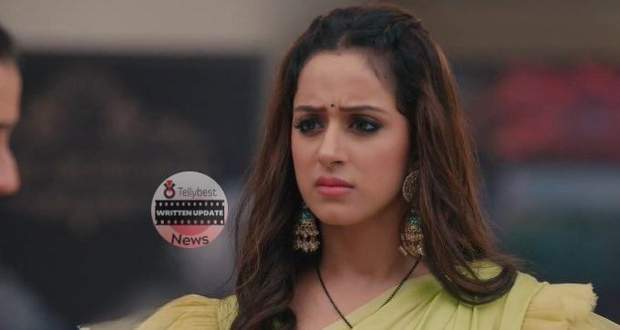 Today's Yeh Hai Chahatein 23rd September 2022 episode starts with Kalindi getting scared while Pihu threatens her to spill the truth.

On the other hand, Arman tells Chacha Ji that he is worrying about Pihu and Preesha.

At the Yellow Orchid Hotel, Kalindi escapes by pushing Preesha and making her fall down while Pihu and Vanshika fail to catch Kalindi.

Later, Rudra helps Preesha get up while he ties her saree and she looks at him softly.

Preesha inwardly says she is liking Rudra's touch and wants to remain closer to him until Arman's call breaks Rudra and Preesha's closeness.

Vanshika excuses herself as she has somewhere to go while Rudra, Preesha, and Pihu search every floor for Kalindi's room until they see a constable walking into the hotel.

The constable enters room 1001 and Pihu says it must be Kalindi's room.

Rudra says they have to stay the night while he books two rooms on the tenth floor.

Preesha volunteers to pay for herself and Arman gets to know that Preesha has paid at a hotel named Yellow Orchid Hotel.

Arman calls on Pihu's number while she gets nervous and says Preesha's phone has died and they are going to get a spa now at this hotel.

Arman asks the name of the hotel and she says Cupola Hotel, making him even more suspicious.

Rudra tells Preesha and Pihu he will sneak into Kalindi's room through the window.

Preesha says it is dangerous while Rudra taunts her it is good because Preesha dislikes him very much.

When Rudra goes out on the balcony, walking slowly on the railing, Pihu and Preesha get very stressed.

Unfortunately, Rudra falters and he is left hanging on the railing, making Pihu and her SIL shocked.

© Copyright tellybest.com, 2020, 2021. All Rights Reserved. Unauthorized use and/or duplication of any material from tellybest.com without written permission is strictly prohibited.
Cached Saved on: Friday 30th of September 2022 09:18:05 PMCached Disp on: Saturday 1st of October 2022 04:17:03 PM