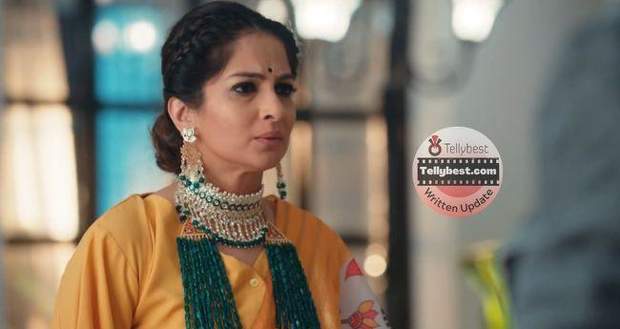 In London, it is late at night as he texts Ishaani and laughs at how confidently she says when he sees her dance audition, he will be sending her tickets to come to London.

However, Ishani gets irritated after he ends the chat and Nayantara laughs, taunting Ishani if the manager is sending tickets for her to London or not.

Meanwhile, back in London, Mohit, Aliya, and Revthi are having breakfast when Seema informs Revthi that she has been called to attend a meeting in Belgium.

Revthi smiles, asking Seema to book the tickets for the next day while Aliya gets the idea to sneak away to India.

In India, Paati is singing Samrat's songs loudly and Ishani closes her eyes while Nayan teases Ishaani for making their grandmother listen to more of the songs.

Chintu giggles when suddenly, a man alleging that he is the house owner, enters screaming Malti's name and announcing that she hasn't paid the rent for three months.

On the other hand, Aliya wakes Samrat up by dropping beer onto his lips.

He gets angry but calms down, seeing Aliya and commenting that he would have been angrier if she dripped anything else, other than beer.

Aliya then shows him the tickets for India, saying Revthi won't know and Mohit comes too, telling Samrat that Aliya has involved him too in her plan.

At Iyer House, Malti gets screamed at by Paati after the owner leaves, giving them a week to get the money and pay the rent.

Nayantara feels sad after Malti reveals she didn't pay the rent because of the dowry and Paati shouts at her for always doing the wrong things.

After Paati leaves, Chintu, Ishani, and Nayantara hug Malti and say she should not worry since they are with her.

After Revthi & Seema leave London, Aliya, Samrat, and Mohit get ready to drive to the airport.

The next day, Malti gets a fever and she worriedly says she has to be at the airport to pick up an NRI named Samrat Rangaswami whose marriage she has fixed with a girl named Swati.

If the marriage is done successfully, Malti reveals she will get a good fee and they can pay their rent.

Ishaani volunteers to pick up Samrat R. from the airport along with Nayantara as Swati's (the bride's) family will be coming too.

At the airport, Ishaani holds the placard of Samrat's name while Nayantara goes to search for Swati's family.

Meanwhile, Samrat, Aliya, and Mohit land in India too but Samrat gets worried that his fans will recognize him here.

Aliya rolls her eyes and says she took care of it, otherwise, Revthi would have known.

On the other hand, Nayantara hears Swati's mother and her friend badmouthing Malti for not being able to do Nayan's wedding due to her skin colour, and she runs off to the bathroom to cry.

Meanwhile, Samrat also sneaks into the ladies' bathroom after seeing a big queue outside the men's washroom but hears a girl crying in the toilet adjacent to his.

He tells the girl (Nayan) that the washroom is a place to let loose nature's call and not cry while Nayantara sniffles and reveals nobody likes her.

Samrat rolls his eyes as he hears her snort and throws the toilet paper in the other bathroom that hits Nayan's head.