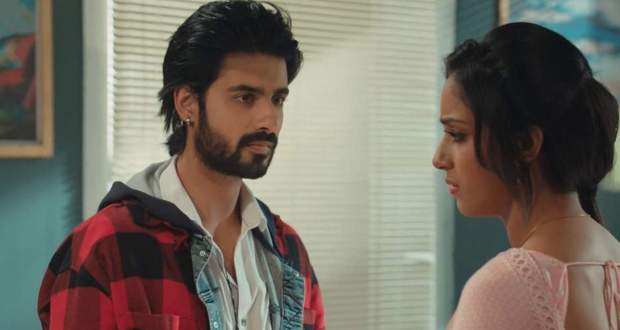 Today's Yeh Hai Chahatein 24th February 2022 episode starts with Rudra telling Preesha that he will stay at her house.

Preesha is confused and asks Rudra the reason behind it.

Rudra gets slightly irritated and tells Preesha that Bunty might come in later to take revenge.

On the other hand, Saaransh takes Roohi to his house. Sharda gets happy seeing Roohi and requests her to eat.

Roohi is comfortable talking to Sharda frankly. But Vaijayanti has a problem with Roohi.

Vaijayanti slams down the glass of orange juice in front of Roohi, forcing the little kid to think that Vaijayanti might be upset with her.

Sharda chases Vaijayanti and asks her to be normal in front of Roohi as she is an innocent kid and the former doesn’t have to discharge her anger in front of her.

Meanwhile, Rudra stays at Preesha’s house and it is the night of Valentine’s Day.

She comes close to Rudra dressed in red for the special day, kissing him all over the face with Rudra returning her love with caresses.

He flirts that a man wants nothing if he has a wife like Preesha.

However, all the romance and closeness with Rudra is an imagination of Preesha which they celebrated years ago.

Mimicking the gift Rudra gave her years back on V-Day, Preesha does the same; it is a locket with Rudra’s image and Roohi’s.

When Rudra wakes up, he asks Preesha why she gifted him a present when there is no type of relationship that exists between them.

Preesha then tells Rudra that Roohi is his daughter but leaves it in a vague explanation.

Later, Rudra and Preesha pick Bubbles to drop her at the hospital for her surgery.

Bunty is angry to see Rudra take away Bubbles from him. Bunty plans a revenge act and decides to take Roohi away from Preesha and Rudra.

He disguises himself as the bus driver of the bus that is taking Roohi’s whole class on a field trip.

Bunty plans to fail the breaks of the bus to harm Roohi.