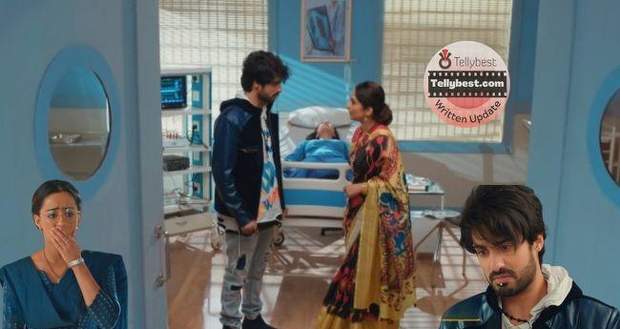 Today's Yeh Hai Chahatein 24th January 2023 episode starts with Samrat telling Nayantara to decide whether she wants Ishaani and Mohit to suffer or if she wants to save them.

Nayan looks down as Samrat asks her if she will be Aaliya's maid or not.

Nayan agrees and tells him that she'll be Alia's maid while Sam orders her to massage Aliya's feet.

Revati stands at the door with Sam and tells him that it is a good thing he did just as she said.

Later, Nayantara returns home and Malti asks her where she was while Nayan thinks to not tell Malti about what Samrat is making her do.

Nayantara tells Malti that they have to find a good lawyer for Mohit and Ishaani and plan to go the next morning.

The next morning, Revthi makes Samrat go and get some medicines for Aliya since they are not available in the hospital and closes the door as he leaves.

She sits beside Aliya and tells her that she can wake up now after which Aliya starts moving and stands up from the bed revealing that she is not paralyzed.

She stretches her body as she complains about body pain due to staying in bed all day like a dead body.

However, Rewati tells her to make sure that she is back in bed before Samrat returns so that he doesn't know she is not paralyzed.

On the other hand, Sam realizes that he has forgotten his phone in the hospital room and goes back to get it.

He opens the door and gets shocked as he realizes that Aliya is not paralyzed seeing her standing.

He confronts Aliya while shaking her body but Revati tells him to let her go since she will reveal the truth to him.

Revati closes the door and tells Samrat he is right about Aliya only faking about being paralyzed.

Sam asks them why they lied to him while Revati reveals to him that she and Aliya did it to take revenge on Mohit and Ishaani.

Samrat gets frustrated when Revati tells him that they did the drama of suicide and bribed the doctor to lie about Aliya being paralyzed.

Samrat feels humiliated as he states that those innocent Mohit and Ishaani are in jail while Aliya asks him if he is thinking correctly.

Revati tries to manipulate Sam by telling him that Nayan, Mohit, and Ishaani humiliated not only Aliya but the whole family and it is right for them to take revenge.

Sam says that he does not feel good about it since it is not right.

Aliya turns him to face her and emotionally blackmails Samrat & telling him that he does not understand she loves Mohit and wants him with her at any cost.

Rewati smiles with a glint in her eyes as she sees Aliya manipulating Sam into agreeing with her.

Aliya tells him that she wants Mohit to suffer the same fate as she will marry him and divorce him afterward on her terms and conditions.

Sam turns to Revati with a pleading look while she tells him to remember that only she and Aliya will stand by him his whole life.

Revati tells him that all the other girls are gold diggers and asks him to decide right now if he wants to support his family or that cheap Nayantara.

Samrat thinks about it while Aliya asks him if he lied about doing everything for his sister's happiness.

Being trapped in Aliya's emotional manipulation, Samrat tells her and Revati that he will help them.

Sam hugs Revati while she and Aliya show each other thumbs up as their plan starts going on the right track again.