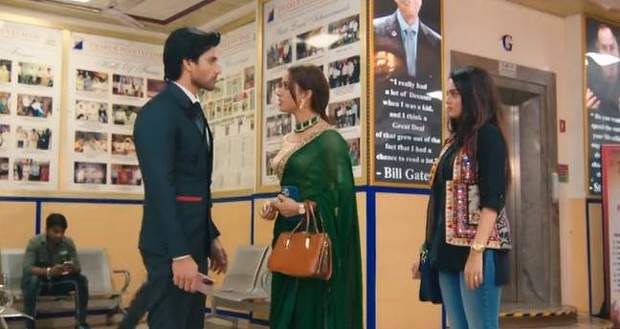 Saaransh loses his hope fast but the shopkeeper taps on Roohi’s shoulder when a woman can be seen sitting in the passenger seat of the car.

Roohi gets excited and exclaims she has found their Mumma, making Saaransh’s face light up in excitement.

Using his brain, Saaransh notes down the number of the car so he can enquire to whom it belongs.

At home, Roohi asks Saaransh how will he find Preesha. Saaransh explains to Roohi that first, they will have to find out whose car it is.

Using an application online, Saaransh finds out that the car belongs to a Kapola Hotel.

Meanwhile, Preesha decides to accompany Pihu to complain about Vidyut who behaved so mannerlessly with Pihu.

However, Armaan says he will accompany both of them as he does not want Preesha or Rudra to run into each other.

On the other hand, Roohi and Saaransh reach Kapola Hotel and ask the receptionist about the car number.

Unfortunately, the receptionist is not allowed to give out the names of guests who used their car service.

However, Saaransh says they should wait in the hotel lobby to get a glimpse of Preesha if she is living here.

Their plan fails when the receptionist catches them secretly hiding and calls the security.

Meanwhile, Rudra worries when Saaransh or Roohi does not pick up his phone.

When they show up a second later, Rudra scolds both of them but lowers his tone when Roohi says sorry to him.

However, Saaransh tells Rudra he has no right to know where Saaransh or Roohi is since Rudra does not consider Saaransh his blood.

On the other hand, Preesha dreams of a nightmare where Rudra is hitting her but it is all a blurred shadow.

Feeling suffocated, Preesha decides to go on a car ride outside in the rain.

Meanwhile, Rudra also goes out to grab a cup of Chai as he cannot bear feeling the pain that reminds him of Preesha.

He covers his face and prays that wherever Preesha is, she comes back to him.

As if fated, Preesha’s car gets impaired at the same spot just across the Tea stall.

However, Rudra misses seeing Preesha by an inch when he helps the driver fix the car and Preesha sits on Rudra’s spot and drinks his Tea.

© Copyright tellybest.com, 2020, 2021. All Rights Reserved. Unauthorized use and/or duplication of any material from tellybest.com without written permission is strictly prohibited.
Cached Saved on: Saturday 25th of June 2022 08:04:15 PM