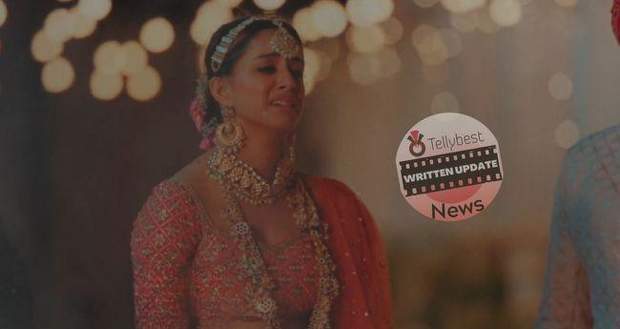 Today's Yeh Hai Chahatein 24th October 2022 episode starts with Preesha, Rudra, and Sharda all dressed in white for mourning Rudra and talking to the Police Inspector about the possible suspects who could have killed Rudra.

Preesha says that it’s Armaan who caused the blast but the Inspector says that Armaan could not have done it since he is in solitary confinement, where he is being watched 24*7.

Meanwhile, Armaan and his Uncle are celebrating Rudra’s death. Armaan’s Uncle says that Armaan’s plan to kill Rudra was amazing.

When Armaan asks about Rudra's body, Dijvijay tells him to not worry about the body as the Police have confirmed that nobody could have survived that blast, and finally they are rid of Rudra.

In the meantime, the Inspector asks Pressha if she suspects anyone else, to which she responds by saying Vidyut’s name.

Vidyut and Sharda are shocked to hear that but Raj smiles smugly.

Vidyut says that he could never even imagine something like doing that to Rudra, let alone actually doing it.

Sharda also says that there is no way that Vidyut killed Rudra as both of them are not just friends but brothers and she says that Presha has misunderstood.

Preesha says that she hasn’t misunderstood and says that they were very close but she remembers Vidyut saying that he would kill Rudra when he gets a chance.

Vidyut says that he didn’t say that for Rudra but for the person who falsely accused him.

Preesha then says that he deliberately gave his car to Rudra to kill him on the wedding day since Rudra had accused him of stealing the necklace, as well as stealing money from the company and that is why Vidyut killed him.

Preesha asks Vidyut where he was during the last since everybody apart from him was at the wedding. Preesha says that he wasn’t there as he killed Rudra.

Meanwhile, Armaan tells Uncle to keep Pihu close so that they can stay one step ahead of Preesha.

In the meantime, Sharda keeps asking Vidyut where he was, but Pihu pleads to him to not say anything.

Preesha then tells the inspector to take him away while Vidyut pleads to them to believe him.

Just as he was about to be taken away Pihu says that Vidyut didn’t cause the blast since he didn’t even know about it, as Vidyut was with her during the blast, having intimate moments.

Raj tries to add fuel to the fire by reminding her of the time Vidyut humiliated her on stage.

Pihu reveals that she loves Vidyut and says that Rudra had blessed them.

Pihu says Vidyut also kept Karwa Chauth for her, and the whole blouse-tearing incident was a misunderstanding.

Preesha says she will never forgive Pihu and Vidyut and tells the Inspector to take Vidyut away.

Pihu says that she will go to any lengths to prove his innocence and get evidence.

© Copyright tellybest.com, 2022, 2023. All Rights Reserved. Unauthorized use and/or duplication of any material from tellybest.com without written permission is strictly prohibited.
Cached Saved on: Monday 21st of November 2022 07:00:44 AMCached Disp on: Thursday 1st of December 2022 11:41:45 AM