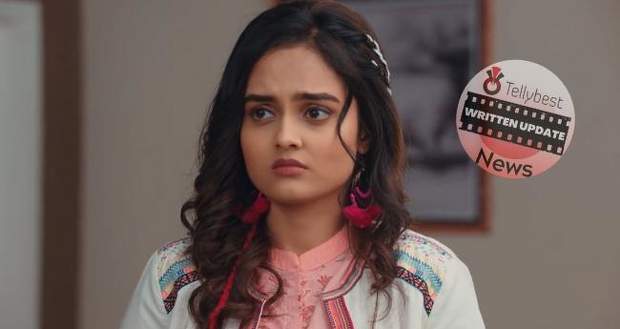 Arman curses when he finds himself getting stuck in the traffic.

Meanwhile, Vanshika is on her bike, just behind Arman's car when he gets a call from Kalindi.

Arman scolds Kalindi and asks why she is calling him while Kalindi says Rudra has tracked her location.

Joining the dots, Arman realizes that Pihu and Preesha can be with Rudra since Preesha also swiped her card at the Yellow Orchid Hotel.

Meanwhile, Pihu and Preesha scream Rudra's name when his feet slip and he hangs down the balcony of the hotel.

Without thinking about her safety, Preesha climbs out of the balcony to extend her hand to Rudra.

Thankfully, Rudra comes up and hugs Preesha with her saying she knew she wouldn't let anything bad happen to him.

She inwardly asks herself why she is not feeling scared of Rudra and rather feeling peaceful in his presence.

On the other hand, Arman bribes a rickshaw driver with two thousand rupees to reach Yellow Orchid Hotel fast with Vanshika following him.

Later, Preesha guides Rudra, suggesting he does not look down, otherwise he might lose his balance.

Meanwhile, the tire punctures of Arman's rickshaw, and he gets scolded by the driver to walk himself to the hotel.

Rudra and Preesha enter Kalindi's room through the window with Preesha saying she won't leave until Kalindi confesses.

Kalindi secretly calls Arman as she has his name saved as 'Ramesh'.

Arman picks up her call and hears Rudra and Preesha in the background when Kalindi faints to the ground.

Throwing the umbrella, Arman runs in the rain saying he has two swords hanging over his head right now while Kalindi gains consciousness.

Preesha informs Kalindi that they know she is pregnant and won't be threatened by the police.

© Copyright tellybest.com, 2020, 2021. All Rights Reserved. Unauthorized use and/or duplication of any material from tellybest.com without written permission is strictly prohibited.
Cached Saved on: Sunday 2nd of October 2022 12:44:41 PM