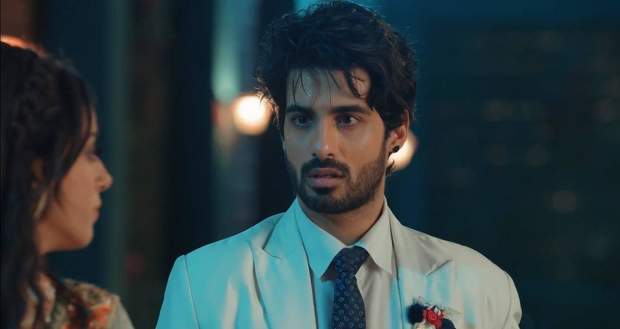 Today's Yeh Hai Chahatein 25th April 2022 episode starts with Preesha asking Rudraksh about his waistcoat while he brings it out of his pocket and tells her that he used it to clean the blood from the trunk of the car.

Preesha once again asks him if they're doing the right thing while Rudraksh scolds her for thinking the same thing again and again.

Rudraksh tells Preesha to think about Saaransh and convinces her to help in his plan.

Meanwhile, Saaransh calls Alia to get information about Dev and later calls Rudraksh to inform him that Revati has returned home.

Rudraksh calls Saaransh and disconnects the call while telling Preesha that they should take him to counsel after this whole thing.

However, Rudraksh sees Preesha and questions her if she's okay while Preesha says that nothing will be okay in the future which ensues an argument between the two.

They reach Revati's flat building and open the trunk of her car to remove the dead body.

As they are bringing the body towards their car, they suddenly see the opposite apartment light and a Jagrata going on there.

Rudraksh and Preesha hide behind the gates while Revati comes to the balcony to clear her mind.

The neighbor Rimmi invites Revati to the Jagrata while Rakesh convinces her to go and tells Rimmi that Revati's coming soon.

Rudraksh and Preesha hide the body under Revati's car while Preesha again feels fearful of their actions and starts blabbering.

Rudraksh hears the sound of the door clicking and drags Preesha away from there just before Revati comes out of her room.

Rudraksh gets scared seeing Dev's hand sticking out from the bag.

Luckily, Revati goes to the Jagrata without noticing Dev's body which relieves Preesha and Rudraksh.

Later, Preesha forms a plan and informs Rudraksh that they need to get inside the Jagrata and go before the Jagrata ends so that the people don't get suspicious seeing them there.

The singer for Jagrata comes and the couple requests him to take them with him to the Jagrata to sing and manipulates him into lying that he called Rudraksh there to sing.