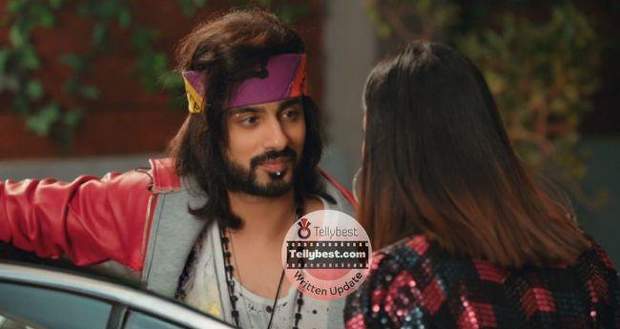 However, as he hears her sniffle, he throws a paper towel at her which hits her head.

Nayantara shrieks an 'Ow!' and starts complaining that people have started hitting her now.

Samrat clarifies that he threw the paper towel so her 'surr surr' noises go absent and she is able to speak properly.

Frowning, Nayantara speaks that she doesn't need anyone's sympathy and throws back the paper towel back at Samrat who says he needs it.

She then asks since his voice is that of a man's, why he is here in the female washroom.

Samrat keeps Nayantara busy with her ramblings and states if she sees him, she wouldn't kick him out since he is a ladies' man.

However, Nayantara while fixing her glasses alleges that even if he is the last man on this Earth, she would not be with him.

Samrat hurries out of the bathroom after he gets a call from Revthi and makes an excuse that he will talk to her later.

Meanwhile, Ishani gets tired of holding the placard of Samrat's name but ends up spotting Mohit.

She squeals his name and introduces herself too excitedly to Mohit and says she is the same girl he was chatting with.

Ishani reveals that since she couldn't come to London, Mohit came to India for her while Mohit gets awkward.

He asks Ishani not to waste his time and hers since he is in India for some official purposes without Samrat as Ishani thought Samrat had come too.

Ishani then calls Malti but her phone goes switched off and then dials Paati's number.

Ishaani asks Paati to send the photograph of Samrat Rangaswamy since she doesn't know him by face.

Fate plays a chaotic game because Nayantara comes hurrying after the bathroom boy to give him his hankie but bumps into Samrat Rangaswamy, splashing a bucket of dirty water onto him.

Ishani comes there and horrifiedly whispers into Nayan's ear that he is Rangaswamy.

The timing gets even more wrong since Swati's mother and her gossip friend arrive there too and gets to know that Samrat has broken this alliance.

After he leaves angrily, the gossipy friend badmouths Nayantara to be a source of bad luck wherever she goes.

Nayan feels bad and she curses the bathroom boy due to who all this mishap happened.

Ishani asks her to forget this because they first have to let Malti know somehow.

Behind where Nayantara and Ishani are standing, Aliya, Samrat, and Mohit get into their taxi.

Dil Sambhalja Zara song plays in the background with beautiful haunting lyrics of the dangers of falling in love when Nayan's pink dupatta flies over Samrat's face.

Her back is faced by him as he drops the dupatta out and closes the window.

In the middle of one way, Chintu falls down from his bicycle in front of Samrat's taxi and Samrat starts to scold him for driving too fast.

Chintu urges Samrat to look behind him at the sign board which says it is one way.

Samrat widens his eyes at the boy's fast reply and scolds the driver and then asks Chintu to be careful and take care of himself.

Mohit then whispers to Samrat to leave before anyone else recognizes him.

At Iyer House, Swati's mother is already there and labels Nayantara as bad luck.

Malti's anger which was first directed at both Ishani & Nayan for messing things up gets transferred to the lady as she asks her to leave since she has no right to shame her daughter.