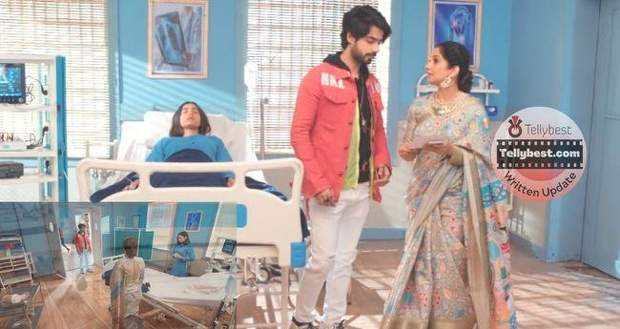 Today's Yeh Hai Chahatein 25th January 2023 episode starts with Nayantara and Malti meeting the lawyer who studies their case and denies taking it stating how weak it is as the other party has all the proof against them.

Nayantara requests him to find a way to save Ishaani and Mohit and tries convincing him that they are being honest in the case.

The lawyers refuse while asking them to find another lawyer.

Malti and Nayantara visit many lawyers and all of them deny taking up their case calling it an open and shut case or being it against the most influential person, Samrat.

One lawyer agrees with them, however, he tells them that his fee will be very high which will cost them lacs of money.

Disappointed, Malti and Nayantara leave and get worried as they cannot think of any other way.

Nayantara states to Malti that there is only the last way which is the settlement with Samrat to take his complaints back.

Saying this Nayantara leaves for the hospital and thinks that to convince Samrat she will have to take of Aliya properly.

Meanwhile, Aliya is typing a message on her mobile while Nayantara is coming toward her hospital room.

Aliya sees Nayantara coming and goes back to her lying position while praying that Nayan doesn't see her phone with a half-typed message.

Nayantara checks up on Aliya and looks for Samrat to talk to him and when she doesn't find him, she starts leaving.

At the same time, Aliya's phone starts ringing and Nayan stops in her tracks looking for the source of the sound.

The phone stops ringing and Aliya sighs in relief which was short-lived as it rings again.

Nayantara spots the phone and picks it up, making Aliya almost believe that she is caught.

However, Samrat comes there at the right moment and snatches the phone from Nayan's hand calling it his.

He dismisses her after insulting her which makes Nayantara drop the idea of talking to him now.

Aliya asks Samrat to take the plan further as she is tired of this drama and Samrat agrees with her.

On the other hand, Nayantara meets Prem near the reception and asks him about his health. She enquires if his mom has come and he nods yes.

However, she misses seeing his mom's face as the doctor comes there asking Prem to take care of himself and she gets distracted.

Further on, Samrat goes to meet Mohit in the jail where he tells Mohit that he took pity on him and has a deal for him.

Mohit looks at him with a bored look while he states his condition that he will take the case back if Mohit marries Aliya.

Mohit asks Samrat why would he agree to Samrat's deal after which Samrat manipulates him into giving Ishaani her normal life back by sacrificing his love for her.

Mohit thinks about the offer as he knows that Samrat has left no choice with him. For him, Ishaani's life and her happiness matter a lot.

Thus, he agrees with Samrat and asks him to take the case back immediately.

Samrat leaves there while Mohit goes back to his cell where Ishaani asks him the reason for Samrat's visit.

Mohit asks Ishani to call Nayantara there and then he will talk.

Later, Nayantara comes there to see Ishaani and Mohit. Mohit tells them that Samrat has agreed to take the case back.

Both the ladies get happy and start praising Mohit while stating how much he loves Ishaani.

However, Mohit, who is feeling bad, breaks Ishani's heart by telling harsh lies. He states angrily that he is fed up living with Ishaani and is done with her.

Ishaani gets shocked to hear this while Mohit continues telling her that he misses his lavish lifestyle back in London and is fed up of living a poor's life.

© Copyright tellybest.com, 2022, 2023. All Rights Reserved. Unauthorized use and/or duplication of any material from tellybest.com without written permission is strictly prohibited.
Cached Saved on: Wednesday 25th of January 2023 11:56:55 PMCached Disp on: Sunday 5th of February 2023 04:28:47 AM