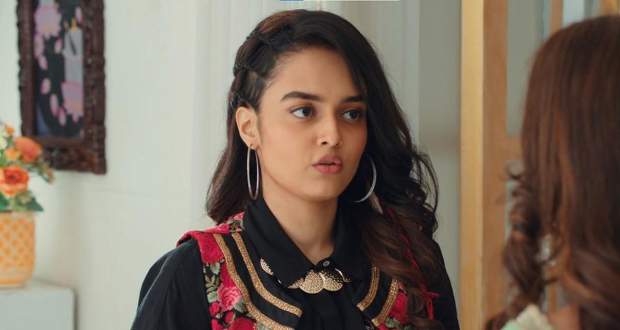 Pihu and Preesha go to the washroom.

Meanwhile, Rudraksha comes to the Principal office and waits for Pihu.

Just then Pihu enters the Principal office and is shocked to see Rudra as Vidhyuth’s guardian.

Pihu is thankful that Preesha is not with her.

In the flashback, Armaan spots Rudraraksha with Vidhyuth and immediately plans to take Preesha away from there so that Preesha and Rudra do not meet. He calls Kanchan and asks her to come to Pihu’s college.

In the present, Pihu accuses Rudra of being a bad example to Vidhyuth.

Rudra looks confused at Pihu’s allegations and asks her what she means.

Before Pihu tells him about Preesha, Kanchan stops her and tells him that she is referring to his celebrity status.

However, Rudraksha tells Pihu that it is not right to judge someone based on the social media reports like gossip as they are mostly untrue.

Rudra also tells Pihu that Vidhyuth has come here to apologise to Pihu for what he has done as he now realised that he was in the wrong.

Pihu mocks Rudra and goes to Vidhyuth asking him to say sorry while expecting the opposite.

However, Vidhyuth apologises to her and even agrees to get recorded while apologising. Although he doesn’t look very happy doing it.

On the other hand, Ruhi tells Saransh to wake up as they will have to go to the hotel to search Preesha.

Sharda to stay away from Saransh as he has a cold and goes to school alone.

Meanwhile, Preesha gets angry at Armaan’s client for cancelling at the last minute and calls Pihu to know about her meeting with the principal.

Pihu is about to tell Preesha about meeting Rudra when Kanchan takes her phone and tells Preesha that everything is taken care of and Vidhyuth has apologised to her as well.

Meanwhile, Rudra scolds Vidhyuth for his misbehaviour and asks him to not repeat this behaviour ever again as his behaviour reflects upon him.

Roohi is disappointed to see Saransh unwell and decides to go to the hotel alone and tricks Sharda into taking her.

Sharda tells Rudra that she is going to Kapola hotel with Roohi to find out what they are hiding while Rudra tells hee that he will follow her.