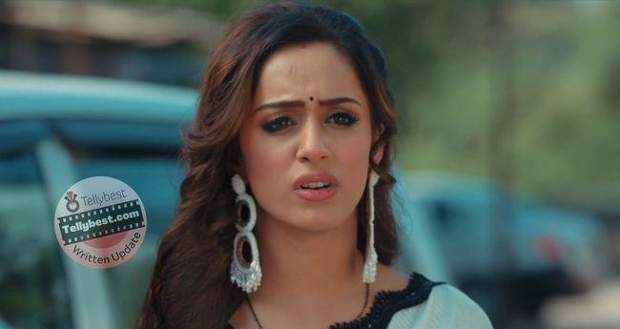 He starts banging and throwing things around while Digvijay justifies himself, stating he had invested that money.

Just then, Saaransh & Rudra arrive there and see this scene unfolding in front of them.

Saaransh phone calls Ruhi immediately & asks her to bring Preesha here so she can witness Arman’s big lie too.

Ruhi does exactly that while Preesha gets confused, thinking why Ruhi brought her here.

Rudra escorts Preesha inside and asks her to see Arman’s real face.

However, all the big talk regarding money happens before Preesha hears it.

She tells Rudra she is going to confront Arman now and have all her questions answered.

When she enters, Arman pretends to be a child again while Rudra shuts Arman up, asking him to quit his drama.

Chacha Ji comes in support of Arman stating why would he talk business with Arman when he has no mental capacity to understand it.

Digvijay says Arman was acting only after watching one news channel.

Rudra cannot believe Arman & his Chacha would go to such an extent and asks him why he didn’t take him to his activity class.

Maneuvering the situation in his favor, Chacha Ji says he is not obliged to answer Rudra in any way or form.

Arman pouts his lips when Rudra charges at him to beat him up.

However, Preesha asks Rudra not to put fake claims and include their kids in it as well.

A flashback occurs where Pihu calls Arman to let him know that Ruhi & Preesha are coming to his office.

In a short span, Arman & Digvijay make up a lie while the flashback ends.

Later, Rudra comes to talk to Preesha privately and says Arman is a liar.

Preesha asks Rudra to leave her alone and live his life wonderfully with Pihu since he is her husband now.

Tears emerge in her eyes when she remembers Pihu’s words in the court, stating Rudra & her got close during their dating phase.

Preesha stops herself from revealing that she knows about Pihu’s pregnancy and drinks the poison of betrayal by herself.

Little does she know it is not Rudra’s kid but Vidyut’s while Rudra vows to expose Arman.

Half-hearted, Rudra tells his kids that they need to come up with a solid plan and says Arman must have hired some servant to spy on them.

They all decide to get Arman's brain scanning done secretly.

Meanwhile, Arman gets into a tiff with Pihu & Digvijay, saying he will not tolerate losses in his business as personal and professional are two different worlds.