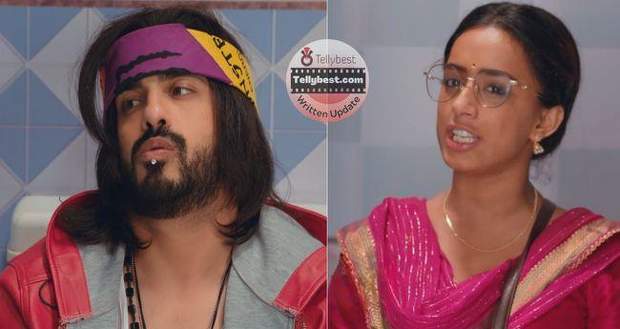 Today's Yeh Hai Chahatein 26th December 2022 episode starts with Malti scolding both Ishaani and Nayantara for messing things up since if things hadn't gone wrong, she would have used the brokerage fees to pay the rent.

Both Nayantara and Ishaani stand on the balcony and decide to get the rent money by themselves, otherwise, Malti would drown herself in pressure.

Just then, Chintu comes there and tells Ishaani he has to say something.

Ishaani rolls her eyes and asks Chintu to go away since they are having a stressful adult talk.

However, Chintu grins and promises Ishaani that she is going to get happy after hearing this news and reveals that he met Samrat Choudhary.

Ishaani then realizes that Mohit had lied to her and tells Nayantara that now she can work her magic and work in Samrat's dance group since Chintu knows the location of his hotel.

Ishaani, somehow, drags an unwilling Nayantara with her to Yellow Orchid Hotel to meet Samrat.

There, Nayantara meets her old friend, Divya, who works in the same hotel and says they have a vacancy for a masseuse open for one day only.

Nayantara asks if there is any open slot for a physiotherapist but Divya shakes her head negatively and tells Nayan that the masseuse job will only be for a day and she can earn 15,000 rupees with it.

Due to the money, she will get for rent, Nayantara agrees and asks Ishaani to be careful when she goes up to meet Samrat.

Ishaani grabs a bouquet of flowers and pretends that she knows Samrat when she sees Mohit coming out of his room on the fifth floor.

She calls out his name and alleges that he lied to her about Samrat being in Delhi and reveals that her brother met Samrat earlier.

Aliya comes there with curious eyes and asks Mohit who is this girl.

Mohit tells Aliya that she wants to be in the dance group and after eyeing Ishani up and down, Aliya asks Mohit to give her a chance.

Mohit huffs and warns Ishaani that she will be given only one chance to prove herself while she smiles, feeling ecstatic.

On the other hand, Samrat walks into the massage parlor of the hotel and lays down naked with just his shorts on.

Divya shows the way to Nayantara to the client, who actually is Samrat.

Nayan feels nervous but after changing her uniform, starts massaging Samrat whose face is facing the floor and whose back is being pressed by Nayan's soft hands.

A true womanizer to the core, Samrat finds Nayantara's feet pretty and thinks if her feet are this pretty, she must be very hot too.

He comments that with feet like this, they shouldn't be placed on the ground, making Nayantara feel disgusted.

She elbows his back hard and makes him shriek and shows him the bathroom to shower.

She comes out of the room while Samrat takes his time with an aching back.

However, Nayantara realizes that she left her phone inside and goes back to fetch it while Samrat is showering.

As she picks up her phone, she sees the same kind of handkerchief with S.C. initials written on it which she spotted in the bathroom and thinks if this is the same guy due to which Rangaswamy's mishap happened.

Samrat comes out of the shower and whispers in Nayantara's ear if she is waiting for him to get naked.

Nayan turns around and gets shocked to see Samrat's face as she only knew his voice.

© Copyright tellybest.com, 2022, 2023. All Rights Reserved. Unauthorized use and/or duplication of any material from tellybest.com without written permission is strictly prohibited.
Cached Saved on: Wednesday 25th of January 2023 11:59:05 AMCached Disp on: Wednesday 1st of February 2023 07:01:13 PM