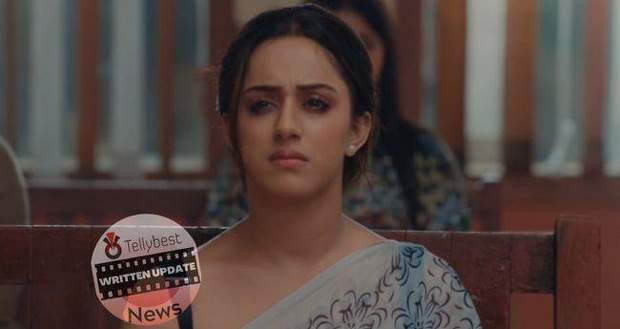 Today's Yeh Hai Chahatein 26th October 2022 episode starts with a crying Vidyut telling Pihu that he is innocent outside the court.

He asks her to trust and Pihu says she is with him.

A flashback occurs in which Digvijay goes to the mechanic and bribes him to lie against Vidyut.

Flashback ends and Pihu asks her father to do something to save Vidyut.

Meanwhile, Sharda confronts Vidyut and slaps him, stating her trust has been broken now.

Vidyut keeps crying, saying he is not the culprit but nobody is ready to listen to him as all the evidence speaks against him.

At night, Preesha cries, hugging Rudra's clothes to her chest when she hallucinates him again.

She looks at Rudra of her imagination with teary eyes who asks her to go to the garden for fresh air.

Preesha smiles as she imagines Rudra bantering with her, making her laugh.

Just then, Sharda sees her condition and gets confused along with Saaransh who joins her.

Preesha tells Sharda that she is talking to Rudra but Sharda says Rudra is no more & she is sitting alone.

The next morning, Pihu comes to Khurana House along with the police who are here to check Vidyut's room.

However, Preesha stops an excited Ruhi to meet Pihu while the police take one of Vidyut's jackets as evidence.

Later, it gets proved in the court that the forensics found RDX in Vidyut's clothes signalling he is Rudra's killer.

Vidyut states that someone is framing him but the decision is already made.

The judge announces that Vidyut will be hanged as he is found guilty of Rudra's death.

When Vidyut goes to beg Preesha to save his life, she slaps him for lying.

It is Digvijay who added RDX to Vidyut's clothes last night & pretends to be nice on the outside.

Later, Digvijay tells Vidyut that there is a way to escape all this and that is by running.

Vidyut gets emotionally manipulated by Digvijay who says that if he gets hanged, Pihu will strangle herself to death.

At Khurana House, Ruhi & Saaransh inform Sharda that Preesha is not in her room & they all go to the terrace.

The kids scream 'Mumma!' when they see Preesha standing at the edge of the terrace.

Sharda plays smart and tells Preesha Rudra has come to meet her so she steps back.

Afterwards, Sharda scolds Preesha for thinking about herself & not the kids who have also lost their father.

© Copyright tellybest.com, 2022, 2023. All Rights Reserved. Unauthorized use and/or duplication of any material from tellybest.com without written permission is strictly prohibited.
Cached Saved on: Monday 21st of November 2022 03:24:37 AMCached Disp on: Tuesday 29th of November 2022 10:48:05 AM