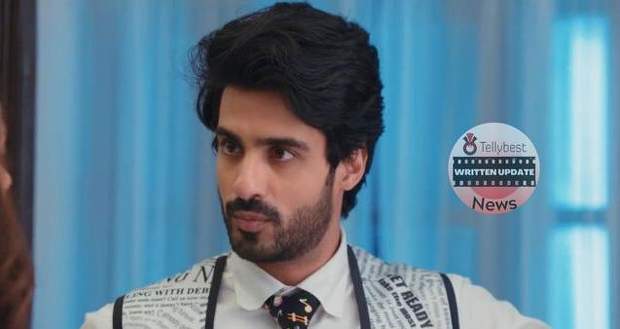 Today's Yeh Hai Chahatein 26th September 2022 episode starts with Preesha telling Kalindi that she is pregnant while Kalindi gets shocked.

In the flashback, while Kalindi faints, Rudra checks her phone.

Preesha tells Rudra she has a gut feeling that Kalindi is pregnant while Rudra finds out that Kalindi’s boyfriend is someone named Veer as she has saved his number with two hearts.

Still in the flashback, Rudra asks Vidyut to call Veer’s number, find out his address, and kidnap him.

Back to the present, Kalindi is shocked to hear Preesha’s claim of Kalindi being pregnant while Rudra says her boyfriend is in his hold.

Video calling Vidyut, Rudra shows Veer with a tape over his mouth and makes Kalindi scared.

However, Preesha tells Armaan that Kalindi is a liar and made Raj go to jail.

Rudra persistently asks Kalindi to spill the truth while Arman signals silently through his gesture not to take his name.

Kalindi tells Rudra that she is pregnant with Raj’s baby as he didn’t want the baby while Vidyut asks Veer to spell out the truth.

Rudra laughs at Kalindi’s claim and says if Kalindi wants, he will get her married to Raj.

On the other hand, Vanshika and Pihu arrive in the same room while Rudra asks Preesha if remembers someone putting the same blame on Rudra once upon a time.

Preesha remembers Kaveri and how she lied about being pregnant with Rudra’s baby.

While Rudra says that the same is happening with Raj, Preesha’s mind replays the flashbacks involving Rudra and Kaveri back in the day along with Yuvraj who falsely dragged Rudra to the court.