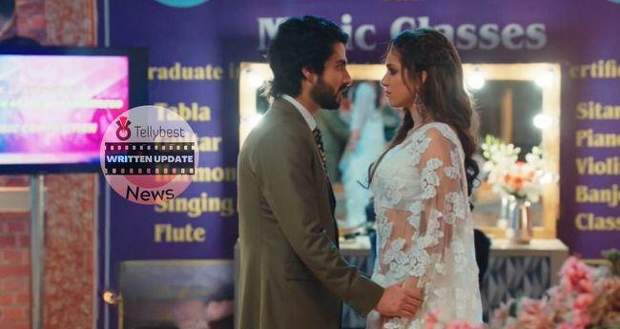 Today's Yeh Hai Chahatein 27th August 2022 episode starts with Vidyut waiting for Rudra to change while Rudra says Preesha’s new family is such that Kanchan gave work to him even before going.

Meanwhile, Pihu freaks out and tells Raj if she did not sing nicely, Raj might not get any contract.

However, he holds his hand to calm her down.

Upon reaching the venue, Preesha tells Arman she will go meet Pihu while Rudra does the same to give his best wishes to Raj.

However, both of them do not find Raj or Pihu but come face to face.

Preesha gets angry when she sees Rudra.

Preesha says she will go outside, but her saree’s pallu gets stuck.

She scolds Rudra for holding her pallu but when she turns around, he is not even holding it.

Rudra smiles while Preesha decides to leave but this time, the hooks of her blouse tear apart after colliding against a sharp object.

Preesha immediately hugs a pillar with her back while Rudra says he can help her.

He even says he will close his eyes and Preesha finally gives in.

Like a good boy, Rudra closes his eyes and stands back at Preesha while she watches his closed eyes in the mirror.

Rudra apologizes, saying he is taking extra time with the safety pin since his eyes are closed.

Preesha orders Rudra to open his eyes and when he does, he executes the task efficiently.

Internally, Rudra’s heartbeats are beating fast being so close to Preesha.

Meanwhile, Arman gets angry when he hears Rudra’s name being announced as the chief guest of the night.

He decides to confront Pihu about this while Vidyut worries about where Rudra Bhai is.

Meanwhile, this time Rudra grabs Preesha’s pallu when she is about to go.

He tells her he cannot tolerate her hating him while Preesha says he should have thought of this when he used to torture her.

Rudra’s tone is desperate as he reveals Arman’s wrongdoing to Preesha, saying Arman messed up with Preesha’s memories.

Rudra asks Preesha to feel from her heart and tell him how she felt when she walked into the Khurana House.

Preesha says Arman loves him and Rudra finally reveals that Saaransh and Ruhi are Preesha’s kids.

Closing his eyes, Rudra rests his forehead against Preesha’s while she struggles to look him in the eye.

False flashbacks of Rudra slapping Preesha and pushing her off the balcony replay in her mind and she screams, pushing Rudra away.