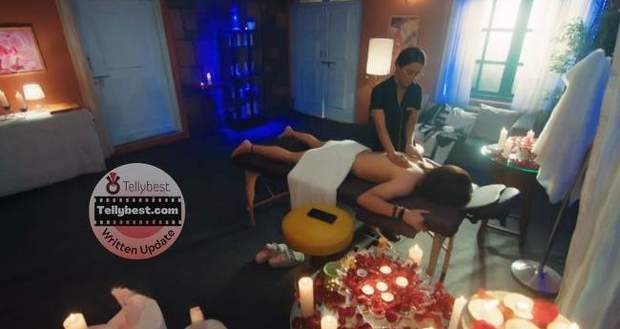 Samrat asks if she knows him and she nods, narrating the whole story of Rangaswamy and the airport bathroom incident.

Samrat gets surprised by the information and utters that this was the girl who was crying in the bathroom.

He eyes her up and down once again while Nayantara asks him if he won't rave about her feet which he wanted to never touch the ground during his massage.

Samrat narrows his eyes and says her feet are pretty but the face. . . Nayantara shuts him up, saying she doesn't care what he thinks because her family's opinions matter the most.

She rants on, telling Samrat that due to him, she lost the money she could have paid as rent while Samrat hands out the cash to her for the massage.

Samrat comments that every girl talks about self-respect but at the end of the day, they all run after money while she says she will run after it since it is her hard work's money.

Similarly, Ishani gives her dance audition to Mohit but gets sad when Mohit reveals he cannot hire her as a dancer since their company only deals with London locales.

Back home, Malti paces back and forth in tension but Nayantara hands her the fifteen thousand rupees she earned today.

Malti hugs her and the happiness doubles when Ishaani comes there as well and gives the other fifteen thousand to Malti.

Malti questions Ishaani where did she get it from and she lies that she took a dance workshop for school students.

Later, Nayantara takes Ishaani to their room and interrogates where did she get the money from and Ishaani reveals that she sold Mr. Bose's (dance instructor) phone as Nayan didn't want her to keep something that comes from a bad source.

Nayantara then asks Ishaani how her dance audition went and Ishani reveals that Samrat's dance group only hires people from London.

However, Nayantara hugs Ishaani and says she will have much better opportunities.

Meanwhile, Aliya introduces both Mohit and Samrat to her school best friend, Kiara, who is getting married.

At Iyer House, Kiara's mother, Mrs. Kathuria comes to invite Malti to Kiara's wedding functions since she fixed it.

Malti expresses her gratitude and asks Nayantara and Ishaani to accompany her as well since, at the wedding, many potential grooms from good families will be present.

Malti then urges both Nayan and Ishaani to not reveal to anyone there that they are sisters because last time the people who chose Nayan as their bride, changed their decision when they saw Ishaani.

Paati encourages Malti's decision since it will benefit Nayan and Chintu giggles in the background.

At the Haldi ceremony venue, Kiara asks Aliya if she can ask Samrat to perform, however, Aliya denies it since no media should know that Samrat's here.

Kiara reveals that the guests won't have their phones with them during the event so this way, Samrat's face or news of being in Delhi will not reach anyone.

Meanwhile, Samrat gets irritated when Kiara's side of the family keeps giving him small tasks like handing over a plate full of flowers to the priest.

At the same venue, Malti arrives with Nayantara and Ishaani and praises them for looking so beautiful.

She then asks Nayan to keep retouching her makeup and apply a darker shade of lipstick but Nayan gets slightly irritated, telling Malti that with makeup, her face won't change.

Later, one of the aunties at the wedding again gives a plate of color to Samrat and it gets spilled as a child runs into him and the color falls on him as well as Nayantara who was coming from the other way.

Dil Sambhal Ja Zara song plays in the background as Nayantara and Samrat face each other and utter a surprised "It is you!" all over again.

© Copyright tellybest.com, 2022, 2023. All Rights Reserved. Unauthorized use and/or duplication of any material from tellybest.com without written permission is strictly prohibited.
Cached Saved on: Wednesday 25th of January 2023 11:38:14 AMCached Disp on: Monday 6th of February 2023 01:31:58 AM