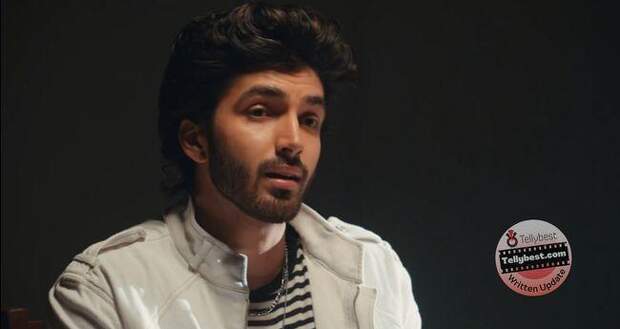 Samrat tells him that it is now since Aliya's life will be back after him being with her.

Revati also stands up as she states that she is glad Mohit left Ishaani and came back.

Mohit states that he will try his hardest and is sure Ishaani will not even think of his cause of the way he broke her heart.

Samrat tells him that he will get married to Aliyaa after two days.

Just then, the nurse comes there and gives them the receipt for the medicines.

Sam sends Mohit to get the medicine and closes the door as Aaliya jumps up in the excitement of getting married to Mohit.

Aaliya hugs Samrat for getting Mohit married to her and convinces him and Revati to take her shopping.

On the other hand, Mohit bumps into Nayamtara in the hallway while she looks at him with anger.

She asks him why he isn't happy after being with his first love.

Samrat comes there just then and watches them while Mohit tells Nayan that he is just a little upset seeing Aaliyah in that condition.

Sam interrupts them just then and asks Nayan what she is doing there.

Nayan responds that she is there to take care of Aalia as he ordered and is about to leave once she realizes that she does not need to.

However, Sam holds her hand and stops her while stating that he hasn't permitted her to do that yet.

Elsewhere, Ishaani's choreographer praises her quick learning skills while the manager comes there and informs them that Ishaani's costume is not made yet.

The choreographer suggests they go to the RM mall to pick out the perfect outfit for the perfect lady (Ishaani).

Later, both Isaani and the group of Samrat, Nayan, Mohit, and Aaliya bump into each other out of the mall.

Nayan informs Ishaani about Mohit and Aliya's marriage and Ishaani congratulates him while wishing that he becomes happy in his second marriage.

Samrat also gifts Mohit a brand new car in front of Ishaani and Mohit states that he was right in his decision of leaving Isaani for Aliya.

Ishaani feels hurt and goes inside while the group follows after her inside.

Inside the shop, Samrat looks at Ishaani and states loudly that Mohit and Aliya are a perfect match.

He further goes to Nayan and tells her that she will pick out Aliya's outfit and Mohit will coordinate the colors.

Mohit goes to Aliya and holds her hand telling her that he is happy to be spending his future with her.

Ishaani leaves while Mohit leaves Aliya's hand and goes to the changing room.

At the same time, Nayan thinks to herself that she is sure that Mohit is acting about hating Ishaani after seeing how he became sad once Ishaani left.

Nayan also makes an excuse to Samrat for trying on clothes and goes after Mohit to talk to him.

Nayan walks into the changing room with him and questions why he is acting but Mohit continues her act of not being in love with Ishaani and wanting to live in luxury with Aliya.

Back outside, Samrat asks Aliya how he is looking in the sherwani and she compliments him while he looks around and wonders if Mohit and Nayan are talking to each other in the changing rooms.

He makes an excuse to Aliya and goes to the changing room and he knocks on each door.

The lady inside scolds him while he goes to the other changing room and knocks asking if Mohit is in there.

Nayan and Mohit get silent while she signals him to speak.

Mohit makes an excuse while Samrat asks him if he is alone inside.