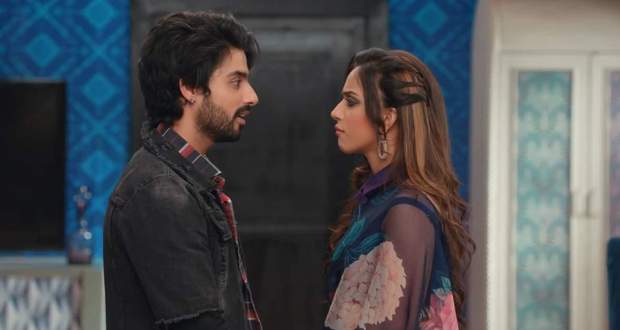 Today's Yeh Hai Chahatein 27th May 2022 episode starts with Rudra and Preesha consoling a worried Saaransh as the police raids the entire Khurana House in search of drugs.

Roohi asks Preesha the reason for the police’s sudden arrival at their house and walks toward Saaransh’s room to ask the same from Revati.

Hearing Roohi’s footsteps, Revati stops from taking out the brown envelope she has hidden in Saaransh’s room.

As Roohi forces Revati to tell her the reason for the police’s arrival, Revati explains that the police are here to look for drugs that look like white powder.

The description of drugs as the white powder gets stuck in Roohi’s mind as Revati leaves Saaransh’s room and asks the police to fasten their raid and arrest Saaransh.

However, the police cannot do that until they find the evidence.

Gopal’s suspect grows more and more as he sees Revati chat with one of the police officers.

Soon enough, Roohi discovers the same brown envelope in which Revati hid the drugs and keeps it inside her kurta so that the police don’t find it.

Meanwhile, #RuSha scolds the police for coming into their house unannounced as they are simple, innocent, working-class people.

However, Sharda screams and calls #RuSha to check on Roohi who is falling unconscious.

A panicked Rudra tries to rouse Roohi’s shutting eyes as Roohi tells her Lal Tamatar that she ate white powder.

Revati gets shocked as this plan of hers also fails.

Roohi goes into an emergency as the doctor informs Preesha and Rudra that her condition is critical.

Unable to control her crying, Preesha prays inside a Durga Temple as Revati feels satisfied by the outcome of her plan even if the police weren’t able to arrest Saaransh.

As Preesha walks out of the crowded temple, she hears some snake charmers talk about a lady who approached their friend for a poisonous snake in return for a huge sum of money.

Preesha tells them that she recently got bitten by a snake and asks them if they remember the lady’s face.

When Preesha shows them a recent photograph of her wedding rituals, the snake charmers immediately point toward Revati’s picture.