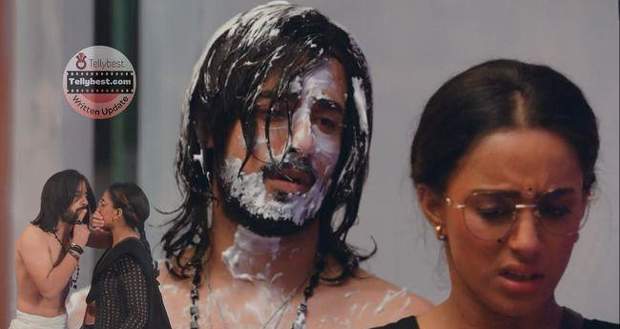 Today's Yeh Hai Chahatein 28th December 2022 episode starts with Nayantara shouting at Samrat who thinks she is stalking him.

Samrat accuses Nayantara of being one of his fan girls and asks her to come to him on Saturday to do some hankie-pankie.

Nayantara gets even angrier and tells Samrat that she's not like those other girls and asks him to stay away from her.

Meanwhile, Malti is all praising Nayantara in front of someone but that is when they both hear her shouting.

Malti goes there to see what has happened to Nayantara while an angry Nayan introduces Malti to Samrat, telling him that she's here for a wedding with her mother, not to stalk him.

Malti asks Nayantara to calm down and get ready as she has some boys for her to see.

Nayantara gets irritated at first but then obliges to Malti's request.

Malti acts all emotional and tells Nayantara to fix her makeup and Nayantara sarcastically asks if she has a choice.

Meanwhile, Ishaani who is searching for Nayan bumps into Aliya who questions her about what she is doing there.

Ishani answers that she's here to attend a wedding and also gets curious about Mohit & Aliya's relationship as Mohit seems awkward around her.

However, Mohit and Aliya leave to attend Kiara's wedding while Ishaani keeps on searching for Nayan.

Later, Nayantara sees many men who either want their wives to be a cook, servants, fair-skinned, or a pleaser at night.

She fakes smiles at all of them and in the end, calls Paati and asks her to come to the farmhouse along with Chintu.

Samrat who is looking for fun gives the key to his room to a random girl named Riya and asks her to come at night.

On the other hand, Kiara requests Aliya again to let Samrat sing at her wedding functions.

Aliya then asks Samrat to sing who gets angry at first but obliges Aliya as she is his sister.

Meanwhile, the dancer in Samrat's group gets a leg sprain and Nayantara being a physiotherapist checks her leg out.

She states that it is a ligament pull and Kiara's mother asks Malti & her whole family to stay at the farmhouse until the wedding is over so Nayantara can keep giving physiotherapy sessions to the sprained girl.

Ishani volunteers to dance instead of the hurt girl and Mohit speaks in favor of her to Samrat, saying she is a great dancer, however, Aliya doesn't like the attention Mohit just gave to Ishani.

At night, Nayantara bumps into a girl named Riya who is heading toward Samrat's room and their card keys get exchanged due to this.

Nayantara arrives in Room 505 but gets the biggest shock of her life when she sees Samrat lying naked on the bed with a rose flower in his mouth.

© Copyright tellybest.com, 2022, 2023. All Rights Reserved. Unauthorized use and/or duplication of any material from tellybest.com without written permission is strictly prohibited.
Cached Saved on: Wednesday 25th of January 2023 10:10:06 AMCached Disp on: Wednesday 1st of February 2023 09:26:39 PM