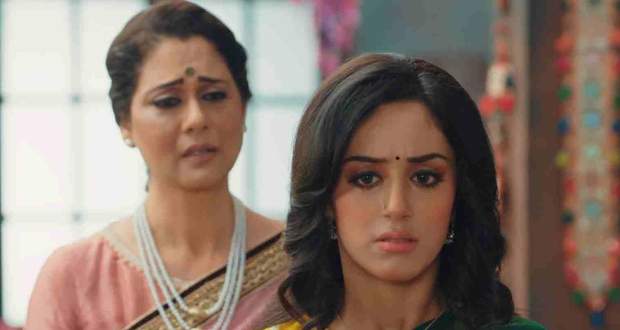 Yuvraj bashes out at Rudra and claims that Rudra is the one who kidnapped Roohi.

Or else how could a little kid of Roohi’s age can come to Delhi on her own.

Rudra denies doing so and feels enraged at Yuvraj.

To calm down the matters, Roohi treads toward Preesha and in doing so, falls and hits her head.

Both Preesha and Rudra immediately embrace her and take Roohi to the hospital.

When the doctor comes out after attending Roohi, he tells everyone that there should be no stressor in Roohi’s surroundings.

Further, the police come into the hospital and Preesha asks who called them. Pretending to be Roohi’s father, Yuvraj tells the officer that Rudra kidnapped her.

However, Roohi’s wellbeing stays atop in both Rudra’s and Preesha’s minds.

Roohi herself admits that Rudra did not even know that she was in his car. The police officer warns Yuvraj to not waste his time anymore.

On the other hand, Vaijayanti is deep in thought and Sharda takes notice of it.

With no news of Rudra coming back home from the studio, Sharda calls Bunty. Bunty tells the whole situation to Sharda and the latter arrives at the hospital shortly.

Everyone tries to cheer Roohi up. Upon seeing Sharda, Rudra’s mother, Roohi ends up calling her “Dadi”.

Everyone gets shocked and Roohi confirms if she can or cannot call Sharda her “Dadi”.

After Roohi has eaten, Yuvraj tries to make Rudra’s family go away.

However, Roohi grabs Rudra’s hand and asks him to stay.

When Yuvraj insists Roohi to not be stubborn, the nurse arrives and warns everyone that Roohi must be taken care of by all means.

Hearing this, Preesha assents that Rudra stays the night and Yuvraj has to leave.