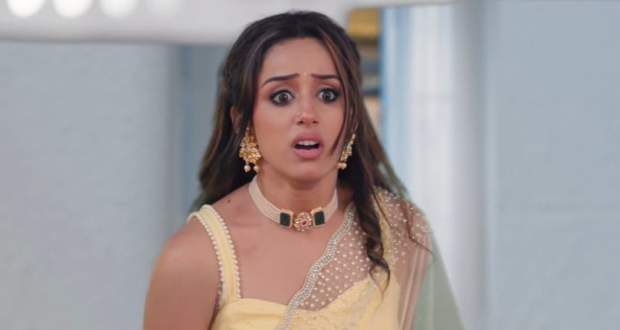 However, he tolerates the pain happily because Preesha comes running down to him in a panic, calling Saaransh's name.

Preesha holds Saaransh's hand while she puts the fire down and asks him if he is feeling okay.

Saaransh asks Preesha whether she remembers something or not but Preesha says she feels a connection to him since he is Roohi's brother.

However, Preesha asks Saaransh to accompany him to her room so she can put an ointment on his burn.

Saaransh cries while Preesha puts cream over his feet and he does the same to her hand.

Saaransh quietly tells Preesha he misses his Mumma a lot so receiving Preesha's love and care means a lot to him.

Smiling, Preesha hugs Saaransh and tells him he can come to her anytime he misses his mother.

On the other hand, Arman finds out that Saaransh and Rudra are here and follows them to the resort restaurant to know their plan.

Saaransh tells Rudra that Preesha felt a little bit of deja-vu but did not get her full memory back.

To trouble Rudra more, Arman bribes the waiter to put a powder in Rudra's drink that makes him dizzy in the head.

Arman also asks for the master key for all the rooms from the waiter by bribing him.

Later, when Arman goes to Preesha's room, he learns that she was waiting for him since nine but he didn't come, saying he was unwell.

This makes Arman alert because he never called Preesha like this and suspects Rudra's hand in this.

During dinner, Armaan bribes the same waiter and asks him to spike Preesha's drink as well.

When Arman returns to the table, Preesha gets angry and asks him why he never told her that Roohi and Saaransh's father is none other than Rudra.

© Copyright tellybest.com, 2022, 2023. All Rights Reserved. Unauthorized use and/or duplication of any material from tellybest.com without written permission is strictly prohibited.
Cached Saved on: Monday 21st of November 2022 08:27:03 PMCached Disp on: Saturday 3rd of December 2022 02:32:16 PM