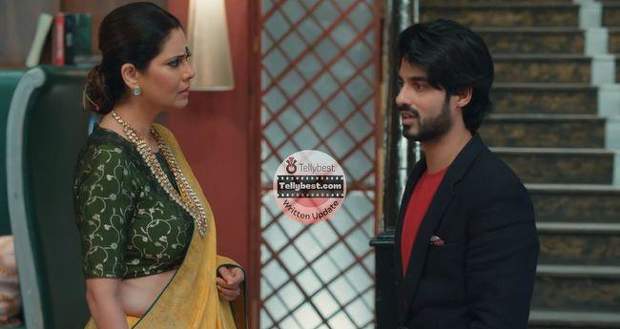 Preesha tells Rudra that she thought that he died in that bomb blast and Armaan gave her a proposal that if she marries him he will take her to Revati who had her child.

So Preesha was left with no choice but to marry him but after that Revati and Armaan faked a fight and Armaan told Preesha that he knows where Revati went with her child.

Preesha took Armaan to the hospital and the doctor told her that Armaan had brain damage and he has become a child.

Preesha justifies why she married Armaan in front of everyone.

Feeling guilty for his actions, Rudra holds Preesha and tells her that they will find the child and Armaan will suffer.

Meanwhile, Pihu calls Digvijay and tells him the situation and that Armaan’s truth is out in the open.

On the other hand, Rudra is aggravated and he throws water on Armaan who is lying on the carpet while Armaan wakes up and analyzes the situation.

He walks up and acts like a child, but Rudra pushes him and tells him that they know his truth.

Armaan asks for Preesha’s help but Preesha slaps him and tells him that she knows his truth.

Rudra tells Armaan that he injected him and took him to the doctor to get his brain scans and tries to punch him.

Armaan shows his true colors to everyone and starts to reveal his plan step by step.

Firstly, Armaan says that he knew that Preesha’s weakness was her lost child so he blackmailed her into taking the charges off of him and marrying him.

Secondly, he planted a fake Revati and a fake child to confuse Preesha and keep her tied to this marriage.

Thirdly, he bribed the doctor to present some fake reports to Preesha.

Armaan admittedly tells that he did all this to be close to Preesha, hearing all this Preesha is filled with disgust.

Armaan confesses that when he touched Preesha, it was caught by Ruhi and he deleted the video on her phone that proved Armaan was faking.

He says that after that Armaan kept his guard up against all the plans like the fake bomb, the CCTV camera, and his office.

Armaan applauds Rudra for his master plan of giving him sedatives and taking him to the hospital for his brain scans.

Armaan tells Rudra that even if they know the truth it doesn’t change the fact that Rudra is married to Pihu and Preesha is still married to Armaan.

Angry Rudra tells Armaan that he will not let Armaan live, and both Armaan and Rudra fight.

Rudra tells him that he has won as his Preesha is with him now and he throws Armaan out.

However, Armaan laughs and tells him that this house belongs to him "Armaan Thakur" not "Rudraksh Khurana".