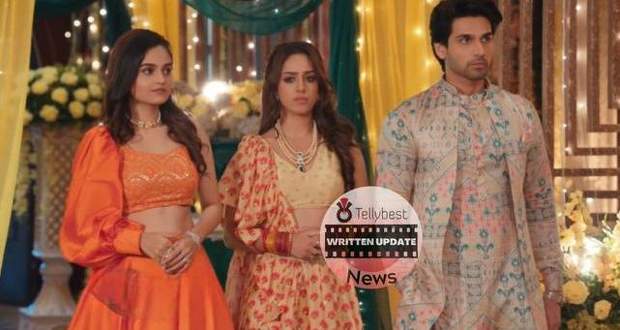 Sharda says that they have come at the right time as the Haldi ceremony is just about to start.

Afterward, Rudraksh and Vanshika flirt in front of Preesha as he puts Haldi on Vanshika's cheek by rubbing their cheeks together the same day as he did with Preesha once upon a time.

Preesha feels jealous as she recalls the past moments with Rudraksh and clenches her fists to calm herself.

Pihu asks Preesha if she's jealous but Preesha says that she's not jealous.

Pihu gets upset thinking that her plan is not working but after she sees Preesha's clenched fist, Pihu smiles.

On the other hand, the Haldi function ends and Rudraksh picks up Vanshika in his arms while they both keep looking into each other's eyes.

However, Preesha loses control of herself and angrily puts her foot out to make Vanshika trip on her feet.

Vanishika lies that she tripped on her own while Rudraksh thinks that Preesha's memories are lost but her feelings for him are still there in her heart.

Afterward, Roohi takes Preesha upstairs to show her room while Saaransh takes the Haldi which the bride has to put on as her ritual.

He intentionally spills it on Preesha and lies that he was in a hurry and didn't see where he was going.

Roohi tells Preesha that she will take her to Rudraksh's room so that she can clean herself.

Roohi leaves Preesha in Rudraksh's room while Rudraksh puts his hand out of the bathroom and asks for a towel.

Preesha thinks to help and gives him the towel when he suddenly pulls her inside and gives her a back hug.

However, he acts as if he was expecting Vanshika and takes a shower with Preesha while she wonders why Rudraksh's touch is not disgusting to her but rather comforting.

On the other hand, Armaan gets suspicious and walks toward Rudraksh's room when he trips on glass marbles and falls.

At the same time, Preesha tells Rudraksh that she feels as if she's reliving a memory and Rudraksh tells her that they both have a long history with this shower.

© Copyright tellybest.com, 2022, 2023. All Rights Reserved. Unauthorized use and/or duplication of any material from tellybest.com without written permission is strictly prohibited.
Cached Saved on: Monday 21st of November 2022 11:27:33 AMCached Disp on: Friday 9th of December 2022 05:42:11 AM